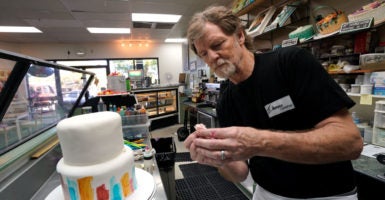 In September, a large group of policymakers from across the nation filed three different amicus curiae (“friend of the Court”) briefs in support of Jack Phillips, the Colorado baker whose case—Masterpiece Cakeshop v. Colorado Civil Rights Commission—will soon be heard by the Supreme Court.

Phillips is being sued by the state of Colorado for declining to bake a custom cake that violates his deeply held beliefs.

The Justice Department, 86 members of Congress, and executive officials from 20 states all argue that Colorado, through its Civil Rights Commission, is infringing upon Phillips’ First Amendment rights by compelling him to communicate a message through artistic speech that goes against his religious beliefs.

Colorado’s action is a gross violation of individual and religious liberty, particularly because the commission interpreted Colorado’s public accommodations laws differently for Phillips than it did for other cake designers.

All three briefs begin by asserting that the Colorado Court of Appeals wrongly determined Phillips’ creation of customized wedding cakes is not expressive for First Amendment purposes, and therefore is not protected speech. Colorado law prohibits the state from “compel[ling] an individual to communicate by word or deed an unwanted message or expression.”

But because the Colorado court found Phillips was not engaging in “speech,” it held the government need only show a rational basis for compelling him to design custom wedding cakes for same-sex marriages. It therefore upheld the commission’s finding that Phillips could not legally refuse to create a cake for a same-sex wedding.

The briefs emphasize that the Colorado court was exceptionally misguided in this determination. The congressmen explain how society has long recognized that designed, celebratory cakes communicate messages that “almost demand to be interpreted by the viewer.”

For example, sending a congratulatory cake to a funeral or a Republican-themed cake to a Democrat-aligned organization can hurt feelings and damage relationships.

The Justice Department likewise notes the Supreme Court has already held that government may not compel the dissemination of messages by private entities or individuals, and that “compelling a creative process is no less an intrusion—and perhaps a greater one—on the ‘individual freedom of mind’ that the First Amendment protects.”

The state officials similarly maintain that customized wedding cakes are artistic works, which are inherently expressive and should receive full First Amendment protection.

In Kois v. Wisconsin (1972), the Supreme Court broadly defined artwork as anything that “bears some of the earmarks of an attempt at art.” Phillips does not sell a simple sheet cake any more than a commissioned painter sells the white canvas on which he paints. Rather, both artists consult with clients, sketch designs from the depths of their imaginations, and spend hours constructing the final product—a point well made by the photographs added to an amicus brief filed by several other cake artists.

For these reasons, the Colorado court should have applied strict scrutiny when considering the constitutionality of compelling Phillips to design a cake containing a message against his own conscience, as it would have for any other artistic expression.

Further, the Colorado court erred in supporting its decision with Rumsfeld v. Forum for Academic & Institutional Rights. This 2006 case held that a federal statute may require colleges to allow military recruiters access to their campuses, and that this did not equate to forcing colleges to endorse the military’s then-message of exclusion for gays and lesbians.

As the congressmen note, Phillips (unlike the colleges in Rumsfeld) does not contend that he may deny same-sex couples physical access to his shop. In fact, he was willing to sell them any pre-made bakery item not requiring the creation of an intricately designed message.

The speech at issue in Rumsfeld was also strictly factual in nature, while the message of wedding cakes portrays the creator as a co-celebrant in the wedding. Moreover, the addition of one more recruiter among the many conflicting voices already on campus cannot be equated with compelling Phillips to create one unified message inconsistent with his religious beliefs.

Even if Phillips is participating in mere “expressive conduct” and not “pure speech,” under the framework established by the Supreme Court in United States v. O’Brien (1968), regulation of such conduct is still only permissible if it (1) is unrelated to the suppression of free expression, (2) falls within the government’s power to enact, (3) advances a substantial government interest, and (4) is no greater than necessary to further that interest.

Colorado’s regulation fails in three of those four respects.

As the briefs go on to note, Colorado enforces the regulation in such a way as to only target specific, religiously motivated expressions against same-sex marriage. Indeed, the commission granted exemptions for artists who refused to create artistic expressions disapproving of same-sex marriage, justifying these exemptions “because of the offensive nature of the requested message.”

The Supreme Court has never upheld regulations compelling private artistic expression. And, as the state officials in particular point out, Colorado could further its interest by creating or facilitating an online reference list of artists willing to create artistic expressions for same-sex weddings.

The state therefore need not force Phillips to violate his conscience in order to ensure same-sex couples have access to custom wedding cakes.

It cites the 1995 case Hurley v. Irish-American Gay, Lesbian, & Bisexual Group of Boston, where the court upheld the right of private citizens to gather and choose what type of message they wish to promote, as long as they are not violating other laws.

The other briefs support this premise by noting Colorado impermissibly utilizes its public accommodation laws to override Wooley v. Maynard’s promise: “The First Amendment protects the right of individuals to hold a point of view different from the majority and to refuse to foster … an idea they find morally objectionable.”

The commission refused to grant the same exemption to Phillips, despite his religious objections to the message.

This also appears to violate the premises of Church of the Lukumi Babalu Aye v. City of Hialeah (1993), where the Supreme Court held the effect of generally applicable laws cannot be “a religious gerrymander”—that is, an impermissible attempt to target religious practices.

Finally, the briefs explain that the Colorado court’s ruling would force people like Phillips to violate their religious beliefs as the price of entry into a marketplace the state effectively controls.

The Supreme Court recognized in Wisconsin v. Yoder (1972) that this type of governmental coercion of conscience is “not only severe, but [an] inescapable burden on free exercise [of religion].”

And Employment Division v. Smith (1990)—a case in which a closely divided court held that a “neutral law of general applicability” can be enforced over the objections of religious adherent—cannot be extended to cover government actions that force religious persons to choose between their sincerely held religious beliefs and operating their own small businesses.

In short, the amicus briefs filed by the Justice Department, congressmen, and state officials clearly lay out a compelling legal argument for why the Colorado Court of Appeals’ decision should be overturned.

The First Amendment protects Phillips from being coerced into creating artistic expressions against the dictates of his conscience, just as it protects all other artists when creating their works of art.