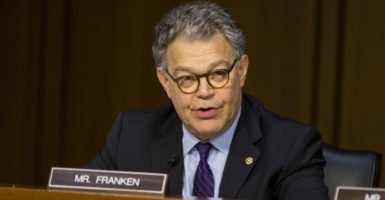 One of the nation’s most respected champions of religious liberty draws a line at being called a hate group by Sen. Al Franken, D-Minn.

During a confirmation hearing for Amy Coney Barrett, a Notre Dame law professor nominated by President Donald Trump to a federal judgeship, Franken said Alliance Defending Freedom is a hate group and that Barrett “wasn’t truthful” in answering one of his questions about her association with the Christian legal aid organization.

Critics say it calls Alliance Defending Freedom, or ADF, an “anti-LGBT hate group” for disagreeing with the radical political agenda of some lesbian, gay, bisexual, and transgender activists.

The Minnesota Democrat, a former comic and comedy writer, also said Barrett was “irresponsible” and used “bad judgment” in accepting an opportunity to teach as part of a fellowship program offered by the 24-year-old organization without first “vetting” ADF.

Michael Farris, president and CEO of Alliance Defending Freedom, scolded the senator in a press release.

“It is deeply regrettable that Sen. Franken i­­­­­­s misinformed about our work on behalf of religious freedom,” Farris said, adding:

There is a real danger of conflating genuine hate groups, like the Ku Klux Klan, with mainstream religious beliefs that are shared by millions of Americans and people from all walks of life across the world.

As a member of Congress, Sen. Franken needs to fact-check before parroting discredited attacks by the Southern Poverty Law Center, a once-proud civil rights organization that is now a left-wing smear machine known to incite violence.

The gunman in a 2012 attack on the Family Research Council in Washington said he learned of the conservative pro-family organization from a “hate group” designation on Southern Poverty Law Center’s website. The shooter in the attempted massacre in June of Republican members of Congress just outside the city had “liked” SPLC on Facebook, according to press accounts.

Farris noted that the Supreme Court recently agreed 7-2 with the Arizona-based ADF in upholding a Lutheran church school’s right to compete for taxpayer money to improve a playground.

ADF lawyers or legal briefs have been before the high court in many other cases, including one Barrett cited in response to Franken at the Senate Judiciary Committee’s Sept. 6 hearing.

“It has a brief at the Supreme Court right now with WilmerHale, one of the most reputable and esteemed law firms in the country,” Barrett said, “and [WilmerHale] wouldn’t be co-counsel with ADF if it were a hate group.”

Barrett, a Catholic, taught constitutional law to students accepted for ADF’s summertime Blackstone Legal Fellowship, which she testified she had heard about from colleagues and law students she respects.

“I mean, this is a group that fights against equal treatment of LGBT people, this is a group which calls for the sterilization of transgender people abroad,” Franken told Barrett at one point, without elaborating.

But in these and other remarks criticizing Barrett, Franken appeared to crib from So­­­uthern Poverty Law Center’s ­­­­oversimplified or false characterizations of the work of ADF’s international affiliate, which upholds local traditions, ADF spokeswoman Kerri Kupec told The Daily Signal in a phone interview Tuesday.

“We would never condone government-compelled sterilization, as he alleged,” Kupec said.

“The Blackstone Legal Fellowship draws top law students from across the country from all walks of life and prepares them for careers marked by integrity, excellence, and leadership,” she said. “It is one of the best things we do.”

But Franken tried to make Barrett’s association with the program sound unworthy of a presidential nominee for the 7th U.S. Circuit Court of Appeals.

“Yeah, they track hate groups,” Franken said of SPLC, addressing Barrett. “And you spoke at an event sponsored by one of those hate groups.”

“I question your judgment,” Franken said. “The root word of judgment is a judge.”

“I gather that the SPLC’s designation of ADF as a hate group is controversial,” Barrett said, after noting the organization’s stature before the Supreme Court. “I didn’t learn about that until more recently. But, again, that was not my experience with the Blackstone program.”

Franken went on to say an earlier answer “wasn’t truthful.”

"The wealthy hate cult that calls itself the Southern Poverty Law Center has designated ADF a hate group." https://t.co/mGrtUxuU25

Generally, in labeling Alliance Defending Freedom a hate group, Southern Poverty Law Center cites what it calls ADF’s support for discriminating against nonheterosexuals and the organization’s defense of Americans who say they don’t want government to force them to violate their religious beliefs about marriage and sexuality.

Franken’s Senate office did not reply to The Daily Signal’s request for comment on Alliance Defending Freedom’s response to his public statements.

In a tweet two days after the hearing, Southern Poverty Law Center said:

Some scholars and researchers stepped up to defend ADF and its work against Franken, first elected to the Senate in 2008 and author of the 2004 book “Lies and the Lying Liars Who Tell Them: A Fair and Balanced Look at the Right.”

“A has-been comic who has evidently lost his sense of irony, Franken faulted Barrett for failing to ‘vet’ ADF even as he failed to vet SPLC’s attack on ADF,” Ed Whelan, president of the Washington-based Ethics and Public Policy Center, wrote in National Review, adding:

Franken claims that he ‘would vet whoever asked me to speak, whether I was speaking for free or I was getting paid.’ Who knows whether he vetted the Council on American-Islamic Relations (perhaps better known as CAIR) before he thanked the group for its ‘efforts to not only promote political engagement and protect civil liberties, but to further our national dialogue’? This is the same CAIR that the Anti-Defamation League faults for its ‘anti-Israel agenda’ …

“It is irresponsible of a United States senator to cite the Southern Poverty Law Center’s smear against Alliance Defending Freedom, an outstanding law firm that has won landmark victories at the Supreme Court,” Emilie Kao, director of The Heritage Foundation’s DeVos Center for Religion and Civil Society, told The Daily Signal in an email.

“SPLC is politically opposed to ADF on many issues,” Kao said, “but it undermines the label of hate when it conflates peaceful groups like ADF with groups like the Klu Klux Klan, which incite racial violence.”

Franken’s remarks came during the same hearing in which Sen. Dianne Feinstein, D-Calif., asked whether Barrett considers herself “an orthodox Catholic,” and said: “The dogma lives loudly within you, and that’s of concern.”

“What’s particularly worrisome about the comments made by Sen. Franken and Sen. Feinstein is they’re reflective of this large cultural push to marginalize and oppress people who hold traditional religious beliefs about marriage and other points central to their faith,” Kupec said, adding:

In a truly free and diverse society, tolerance should be a two-way street. As a nation that prides itself on diversity and freedom, we should be moving forward on a common path of civility, and not labeling those who disagree with us with shameful terms and rhetoric that only shut down the conversation.

>>> Commentary: Disagreement Isn’t Hate, No Matter What the Left Says