How Religious Freedom Erodes, One Step at a Time 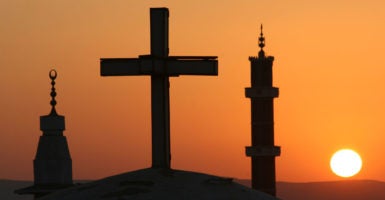 Last week, Attorney General Jeff Sessions announced the formation of a new Task Force on Religious Liberty at the Department of Justice. The action came on the heels of a ministerial summit on religious freedom, which explored how religious freedom is under attack around the globe.

At the summit, Secretary of State Mike Pompeo and Sam Brownback, U.S. ambassador-at-large for international religious freedom, highlighted the problems that arise when governments try to enforce conformity to a single view of what is sacred. Governments do far better, they argued, to honor every individual’s freedom to determine that for themselves. That is the path to pluralism—and peace.

Increasingly, however, that is the path less traveled. Too many nations are following paths leading to the decline of religious freedom.

That awful journey often begins with the social ostracization of religious minorities. In Saudi Arabia, for example, official textbooks teach students to compare Christians and Jews to dogs and pigs.

The next step economically disenfranchises religious minorities, denying them employment and education. In Egypt, for instance, Coptic Christians face extreme prejudice when looking for work—be it with the police force or the military, or even a professional soccer team.

Ultimately, the path away from religious freedom ends in violence, which may come from either the state or civil society groups. Last year in India, Hindu vigilantes killed a 12-year-old Muslim boy for allegedly slaughtering a cow that they consider sacred.

These ugly doings can occur anywhere that activists promote the punishment of nonconformists, the government does not intervene to protect minorities, and the majority of citizens stay silent. And recent developments in America suggest it can happen here.

In Colorado, Jack Phillips, the owner of Masterpiece Cakeshop, gladly served gay customers for two decades. But when his religious beliefs led him to decline creating a custom cake to celebrate a same-sex wedding, the state’s civil rights commissioners compared him to a Nazi and slaveholder.

Tim Gill, the multimillionaire Rolling Stone calls the “megadonor behind the LGBTQ rights movement,” announced he would bankroll a push to add sexual orientation to nondiscrimination laws in states across the country. His professed goal: to “punish the wicked,” that is, those who don’t conform to the new cultural orthodoxy.

Indeed, America is moving rapidly from the “social marginalization of nonconformists” stage to the next stage: excluding them from economic opportunities. When hearing the Masterpiece Cakeshop case, Supreme Court Justice Sonia Sotomayor seemed to endorse economic disenfranchisement when she told Phillips: “Then don’t participate in weddings.”

In a growing number of cases, firefighters, military pilots, farmers, entertainers, and tech CEOs have lost jobs, promotions, and access to markets because they refused to bow to the new orthodoxy. And at least three states and two cities have terminated the contracts of religious adoption agencies because the agencies believe every child deserves both a mom and a dad.

Those who believe in the value of religious freedom must teach new generations how to defend it. These efforts should be bipartisan and ecumenical, including people from both sides of the same-sex marriage issue.

To be effective, we must defend the right of those with whom we disagree to express their beliefs. At the same time, both government and civil society must oppose demonizing religious minorities, speaking out against the rising volume of anti-Semitic and anti-Muslim acts of violence reported by the Justice Department.

The courts should continue to protect dissent from orthodoxies, be they religious or secular. This includes respecting each individual’s freedom to decide what is sacred to them.

One of the greatest American legal and political traditions is that those on both sides of controversial issues may live out their views. And, while government may have a position on each of these issues, our courts have never forced anyone to affirm those positions in violation of their conscience.

Congress can also help uphold religious freedom—for instance, by passing legislation that protects adoption agencies who believe every child deserves both a mom and a dad and to shield those who hold traditional views on marriage from federal sanctions.

America’s Founders resisted the temptation to determine what is sacred for us and to force conformity to a single orthodoxy. They enshrined religious freedom in our Constitution.

Yet today, that freedom is under assault. All Americans must respond by standing up for one another’s freedoms to think, to speak, and to act according to what each of us finds sacred. This is how to ensure our country stays on the path of religious freedom that leads to peaceful pluralism.