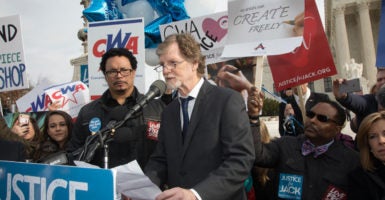 Jack Phillips, who owns Masterpiece Cakeshop in Colorado, argues that making him create a cake that celebrates a same-sex wedding would violate his First Amendment rights to free speech and free exercise of religion. (Photo: Jeff Malet Photography)

On Dec. 5, the Supreme Court heard the case of Jack Phillips, the Christian baker who can’t in good conscience design and create wedding cakes that celebrate same-sex marriages. The justices now will decide whether states, consistent with the First Amendment, can force citizens to express support for same-sex marriage through their artistic products.

But this case needn’t have ended up at the court. And future cases like it can be avoided.

Agree or disagree, but Phillips believes he is serving Christ with every cake he makes. He has previously turned down requests to create Halloween-themed cakes, lewd bachelor party cakes, and a cake celebrating a divorce. He was never reprimanded over those decisions, but the same-sex-wedding cake plunged him into hot water.

Not surprisingly, much of the oral arguments focused on the First Amendment. Phillips argued that making him create a cake that celebrates a same-sex wedding would violate his First Amendment rights to free speech and free exercise of religion, by forcing him to express a message, and celebrate an event, that runs against his beliefs. If the court agrees, it will bar Colorado and other states from applying anti-discrimination statutes in such a way.

But Colorado should never have applied its statute this way to begin with. Indeed, states can avoid First Amendment showdowns by refusing to view support for traditional marriage as “discrimination.”

Part of the problem is that Colorado misunderstood the Supreme Court’s ruling in favor of same-sex marriage in Obergefell v. Hodges. Colorado claims that the court held “opposition to same-sex marriage” to be “tantamount to discrimination on the basis of sexual orientation.”

In fact, as Chief Justice John Roberts pointed out during the Masterpiece oral arguments, the court in Obergefell noted that belief in marriage as the union of husband and wife is held “in good faith by reasonable and sincere people here and throughout the world.” The court stated in its majority opinion that “many who deem same-sex marriage to be wrong reach that conclusion based on decent and honorable religious or philosophical premises, and neither they nor their beliefs are disparaged here.”

The states should not disparage these people and their decent and honorable beliefs, either.

A big part of the problem is that sexual orientation anti-discrimination laws are now being used to “punish the wicked,” in the words of Tim Gill, their biggest financial backer (to the tune of $500 million). But anti-discrimination policies should serve as shields, not swords. They are meant to shield people from unjust discrimination that might prevent them from flourishing in society. They aren’t supposed to be swords used to punish people for acting on their reasonable beliefs.

You can see this when considering the history of Colorado’s law. Within a two-year span, Colorado citizens voted to define marriage as the union of husband and wife and to ban discrimination based on sexual orientation. Many other states, too, simultaneously enacted sexual orientation nondiscrimination policies while insisting that the traditional understanding of marriage is not discriminatory.

Justice Samuel Alito pointed to this reality during oral arguments. At the time that Phillips declined to bake a same-sex wedding cake, Colorado wouldn’t even recognize—let alone issue—same-sex marriage licenses. So the same-sex couple couldn’t get the state of Colorado to recognize their relationship as a marriage.

“And yet when he goes to this bake shop, and he says, ‘I want a wedding cake,’ and the baker says, ‘No, I won’t do it,’ in part because same-sex marriage was not allowed in Colorado at the time, he’s created a grave wrong,” Alito stated. “How does that all that fit together?”

Indeed. Colorado should have never declared Phillips to be guilty of discrimination in the first place.

But sexual orientation and gender identity anti-discrimination policies are used to impose sexual orthodoxy. They’re used to try to force Catholic schools to employ people who undermine their sexual values and to coerce Evangelical bakers to lend their artistic talents to messages about marriage with which they disagree. Sexual orientation and gender identity laws are used to punish people of good will who simply seek the freedom to lead their lives in accordance with their beliefs about human sexuality.

But this is a mistake. And—in what might prove to be the most important comment made during oral arguments—even Justice Anthony Kennedy appeared to reject the American Civil Liberties Union’s argument that the opposition to same-sex marriage just is discrimination against people who identify as gay.

Kennedy explained Phillips’s beliefs: “Look, suppose he says, ‘I have nothing against gay people,’ he says. ‘But I just don’t think they should have a marriage because that’s contrary to my beliefs. It’s not their identity; it’s what they’re doing.’” In response to the ACLU’s claim that this is sexual orientation discrimination, Kennedy responded, “Your identity thing is just too facile.”

We can do better. The United States has reached compromises on similarly difficult moral and cultural issues before. Following Roe v. Wade, Americans refused to use sex anti-discrimination law as a sword to punish pro-lifers.

In 1993, in Bray v. Alexandria Women’s Health Clinic, the Supreme Court resolutely rejected the argument that pro-lifers are inherently discriminatory: “Whatever one thinks of abortion, it cannot be denied that there are common and respectable reasons for opposing it, other than hatred of, or condescension toward (or indeed any view at all concerning), women.”

The same is true when it comes to marriage as the union of husband and wife: There are common and respectable reasons for supporting it that have nothing to do with hatred or condescension. But this is not true when it comes to opposition to interracial marriage—and this is where the analogies to racism break down.

Opposition to interracial marriage developed as one aspect of a larger system of racism and white supremacy, as part of an effort to hold a race of people in a condition of economic and political inferiority and servitude. It was based on the idea that contact with African Americans on an equal plane is wrong.

By contrast, marriage as the union of husband and wife has been a universal human practice until just recently, regardless of views about sexual orientation. This vision of marriage is based on the capacity that a man and a woman possess to unite as one-flesh, create new life, and unite that new life with both a mother and a father. Whether ultimately sound or not, this view of marriage is reasonable, based on decent and honorable premises, and disparaging of no one.

A lack of disparagement also explains why bakers like Jack Phillips have been serving gay customers faithfully for years.

Sparing people such as Phillips from the sword does not undermine the valid purposes of anti-discrimination law—eliminating the public effects of anti-gay bigotry—because support for conjugal marriage isn’t anti-gay. Protecting freedom here sends no message about the supposed inferiority of those identifying as gay; it sends no message about sexual orientation at all.

It does say that citizens who support the historic understanding of sex and marriage are not bigots. It ensures their equal social status and opportunities. It protects their businesses, livelihoods, and professional vocations. And it benefits the rest of society by allowing these citizens to continue offering their services, especially social services, charities, and schools.

During oral arguments, Roberts asked the solicitor general of Colorado how the state would apply its anti-discrimination law to a pro bono Catholic legal organization for the poor that served all comers but couldn’t do legal work for same-sex couples that they would provide for husbands and wives: “So Catholic Legal Services would be put to the choice of either not providing any pro bono legal services or providing those services in connection with the same-sex marriage?” The solicitor general replied: “I think the answer is yes, your honor.”

A line of questioning on the comparisons to interracial marriage brought up the case of Bob Jones University, a school that lost its nonprofit tax status because it prohibited interracial dating and marriage. But do we really want to live in a country where acting on a belief about marriage that people have held throughout all of recorded history—that it’s a union of male and female—is treated as the functional and legal equivalent of racism?

All of us should work to prevent such an outcome. Which is why Phillips need not have ended up in court. We must refuse to use anti-discrimination laws as swords to impose sexual orthodoxy on the nation. As Americans continue to disagree about sex, we must refuse to weaponize the redefinition of marriage.

Even Kennedy seemed alert to this in oral arguments for Masterpiece. “Tolerance is essential in a free society,” he said. But, he continued, “It seems to me that the state in its position here has neither been tolerant nor respectful of Mr. Phillips’ religious beliefs.”

Not every disagreement is discrimination. And our law shouldn’t say otherwise.