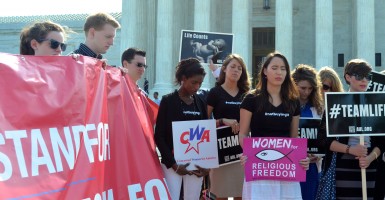 The government can’t compel a “closely held”  business such as the Hobby Lobby chain to cover abortion-inducing drugs or devices in employee health plans if doing so would violate the employer’s moral and religious beliefs, the Supreme Court ruled today.

In a much-anticipated decision, the justices decided 5-4 that the Obamacare provision mandating such coverage in all employee health plans is an unconstitutional restriction on the religious liberty of family-owned, for-profit companies.

Those companies include Hobby Lobby and Conestoga Wood Specialties, the two family businesses — one owned by evangelical Christians, the other by Mennonites — that challenged the mandate from the Department of Health and Human Services.

The court has “little trouble” concluding the HHS  mandate substantially burdens the exercise of religion, Justice Samuel Alito wrote in the majority opinion:

The Hahns [owners of Conestoga Wood]  and the Greens [owners of Hobby Lobby] believe that providing the coverage demanded by the HHS regulation is connected to the destruction of an embryo in a way that is sufficient to make it immoral for them to provide the coverage.

Americans “don’t give up their rights to religious freedom just because they open a family-run business,” Lori Windham, senior counsel for the Becket Fund for Religious Liberty, which represented Hobby Lobby, said in an interview on CNN.

Alliance Defending Freedom represented Conestoga Wood in the consolidated case that was argued March 25 before the Supreme Court.

The HHS mandate, arising out of  a section of the Affordable Care Act, requires employers’ insurance plans for workers to cover 20 potentially life-ending drugs and devices such as Plan B and Ella. If  employers don’t comply, they face hefty fines of  up to $100 per day, per employee.

Supporters of the Obamacare provision, such as NARAL Pro-Choice America, echoed the Obama administration’s argument in saying that exempting some employers on grounds of religion would unfairly limit the access of some women to birth control and other health services.

“Their narrow judgment said that it’s absolutely OK for bosses to make personal decisions for women about our health care,” NARAL President Ilyse Hogue said of the majority’s decision.

“Under RFRA [the Religious Freedom Restoration Act] a government action that imposes a substantial burden on religious exercise must serve a compelling government interest, and we assume that the HHS regulations satisfy this requirement,” Alito said. “But in order for the HHS mandate to be sustained, it must also constitute the least restrictive means of serving that interest, and the mandate plainly fails that test.”

>>> Commentary: Another Part of the Obamacare Mandate Could Fall

Alito wrote that the court’s decision is limited to coverage of contraceptive products required by the health care law:

Our decision should not be understood to hold that an insurance-coverage mandate must necessarily fall if it conflicts with an employer’s religious beliefs. Other coverage requirements, such as immunizations, may be supported by different interests (for example, the need to combat the spread of infectious diseases) and may involve different arguments about the least restrictive means of providing them.

In her 35-page dissent, Ginsburg called the decision “potentially sweeping” because it minimizes the government’s interest in uniform compliance with laws affecting the workplace:

In the court’s view, RFRA demands accommodation of a for-profit corporation’s religious beliefs no matter the impact that accommodation may have on third parties who do not share the corporation owners’ religious faith—in these cases, thousands of women employed by Hobby Lobby and Conestoga or dependents of persons those corporations employ.

The decision was expected to address whether the owners of private, for-profit corporations have the right to live out their beliefs in the marketplace, or whether they must by law, check their values and religious convictions at the door.

“This is a victory for all Americans, regardless of belief or tradition,” Heritage Foundation President Jim DeMint said in a prepared statement, adding:

The Obama administration must recognize that every American has a right to live and work abiding by the convictions of his or her faith. In the words of John Witherspoon, a Presbyterian minister and signer of the Declaration of Independence, ‘There is not a single instance in history, in which civil liberty was lost, and religious liberty preserved entire. If therefore we yield up our temporal property, we at the same time deliver the conscience into bondage.’

>>> Commentary: The Fight Isn’t Over Despite Today’s Decision