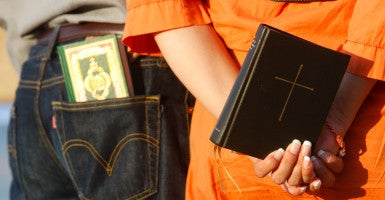 Roughly a quarter of Americans believe protecting rights and freedoms is more important than being kept secure. (Photo: P Deliss/Godong/picture-alliance/Newscom)

The Associated Press-NORC Center for Public Affairs Research’s poll found that 82 percent of Americans believe that religious liberty protections are important for Christians.

Sixty-one percent of respondents said religious liberty protections are important for Muslims, “ranking Muslims as the least deserving of the protections.”

“In the latest survey, eight in 10 Americans said it was very or extremely important for people like themselves to be allowed to practice their religion freely,” wrote the Associated Press. On a partisan breakdown, 88 percent of Republicans said it is important for Christians to be able to practice their religion freely, while 83 percent of Democrats and 69 percent of independents concluded the same.

Sixty percent of Republicans, 67 percent of Democrats, and 49 percent of independents say it is important for Muslims to practice their religion freely. “A majority of the public say the government is doing a good job protecting the right to vote, freedom of speech, freedom of religion, and freedom of the press,” according to the AP and the NORC Center.

Fifty-four percent believe that it can be necessary for the government to “sacrifice freedoms to fight terrorism,” with 45 percent on the flip-side.

The poll was conducted Dec. 10-13 and surveyed 1,042 adults nationwide by randomly selecting households using NORC’s AmeriSpeak Panel at the University of Chicago. Interviews were conducted online and by telephone.

The poll’s margin of sampling error is plus or minus 3.9 percentage points.