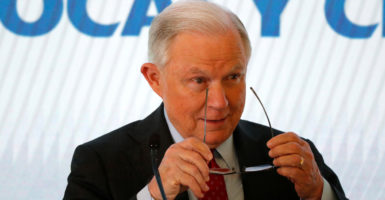 “A dangerous movement, undetected by many, is now challenging and eroding our great tradition of religious freedom,” Sessions said in remarks at the Great Hall of the Department of Justice building in Washington.

“Our Founders gave religious expression a double protection in the First Amendment. Not only do we possess freedom to exercise our beliefs, but we also enjoy the freedom of speech,” the attorney general said.

Sessions said a new “cultural climate” in the United States and the West has left some concerned that their right to practice their faith is under attack. He said:

The task force will help the department fully implement our religious liberty guidance by ensuring that all Justice Department components are upholding that guidance in the cases they bring and defend, the arguments they make in court, the policies and regulations they adopt, and how we conduct our operations. We are also going to remain in contact with religious groups across America to ensure that their rights are being protected. We have been holding listening sessions, and we will continue to host them in the coming weeks.

In October, Sessions issued a memo to every executive branch department outlining 20 key principles in proceeding on rulemaking, litigation, and other operations with a presumption of Americans’ religious freedom, whether they are Christian, Jewish, Muslim, or another recognized faith. The event included a Jewish rabbi and a Sikh who talked about their struggles with religious freedom.

“In June, we filed suit against a town in New Jersey that had refused over and over again—for eight years—to let an Orthodox Jewish congregation buy land for a synagogue,” Sessions said. “Just last week, we filed a brief in federal court supporting the case of a Hindu temple in Maryland that claimed to have suffered discrimination in its attempts to purchase land.”

Sessions will be chairman of the task force. Other Justice Department officials from the Civil Rights Division, the Environment and Natural Resources Division, and Office of Legal Counsel also will serve on the panel.

Among the goals will be to “address novel, recurring, or cross-cutting issues in the department’s work” and to “develop new strategies, involving litigation, policy, and legislation, to protect and promote religious liberty.”

Sessions cited some instances of intolerance toward religion in recent years.

Sessions was referring to the Little Sisters of the Poor court case, which challenged an Obama administration order that the Catholic charity adhere to an Obamacare mandate to pay for contraception and abortion-inducing drugs as part of employee health plans, and to questioning of Trump nominees by Sens. Bernie Sanders, I-Vt., and Dianne Feinstein, D-Calif., and the recent Supreme Court ruling in favor of a Colorado baker who turned down an order to create a cake for a same-sex wedding.

“This is a permanent injunction and a major victory for the Little Sisters of the Poor and religious freedom,” Sessions said, referring to the outcome of that case. “The government has no business telling the Little Sisters that they must provide an insurance policy that violates their sincere religious beliefs.”

Later in the morning, Phillips, owner of Masterpiece Cakeshop in Lakewood, Colorado, spoke at the event as part of a panel of people who said they faced attacks on their religious liberty.

Colorado’s human rights commission fined Phillips for declining to design a special cake for a same-sex wedding in violation of his Christian beliefs. Phillips said he was clear that he would serve any customer by selling his baked goods, but would similarly refuse to design a cake calling someone’s boss a jerk and has declined to design Halloween cakes.

A member of the state human rights panel invoked slavery and the Holocaust in referring to Phillips during consideration of the case.

“For the commission to compare that decision of not violating my faith … to the Holocaust was particularly insulting, because my father served in World War II,” Phillips said. “He landed at Normandy. He fought across France and Germany, got a Purple Heart. He was also part of a group that liberated one of the first concentration camps in Germany.”

During his remarks, Sessions noted that the Justice Department has aggressively enforced the civil rights of people of faith across the United States.

“Since January 2017, we have obtained 11 indictments and seven convictions in cases involving arson or other attacks or threats against houses of worship,” Sessions said, adding:

Our Civil Rights Division has also obtained 12 indictments in other attacks or threats against people because of their religion. And we are not slowing down. Three weeks ago, we obtained a jury verdict against a man who set fire to a mosque in Texas and sentenced a man from Missouri for threatening to kill members of a mosque.