Little Sisters of the Poor Are Returning to Court 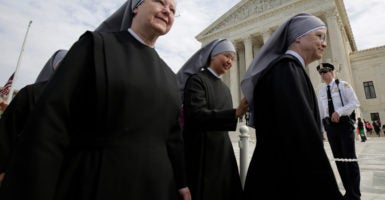 “It is a shame that some folks want to drudge up the last administration's culture war-fighting, and threaten The Little Sisters [of the Poor] and other religious charities,” says Mark Rienzi, senior counsel at Becket. (Photo: Joshua Roberts/Reuters /Newscom)

The Little Sisters of the Poor is returning to court to defend itself against lawsuits from two states that seek to remove the order of nuns’ religious exemption from the Health and Human Services rule.

“It is a shame that some folks want to drudge up the last administration’s culture war-fighting, and threaten the Little Sisters [of the Poor] and other religious charities,” Rienzi said.

Last month, the Department of Health and Human Services rolled back the Obamacare mandate that employers cover contraception and abortion-inducing drugs, as The Daily Signal previously reported.

According to an email from Becket, the firm representing the Little Sisters of the Poor, “shortly after the new mandate was issued, the states of California and Pennsylvania sued to take away the religious exemption the Little Sisters just won.”

Becket is “asking the court to ensure that they can continue their vital ministry of caring for the elderly poor without violating their faith,” according to the firm.

Rienzi said the lawsuits from Pennsylvania and California “are obvious political grandstanding.”

“These lawsuits actually talk about all of the other ways that these states already have and already are using to distribute contraceptives to women who want them, which of course proves that they don’t need Catholic nuns to do it for them,” he added.

Hearings will commence in mid-December, Rienzi said, and some of the Little Sisters of the Poor will be present.

Melanie Israel, a research associate for the DeVos Center for Religion and Civil Society at The Heritage Foundation, told The Daily Signal in an email that the litigation from California and Pennsylvania shows hostility to religious freedom.

“In expanding exemptions to one of Obamacare’s most egregious assaults on rights of conscience and religious liberty, the Trump administration provided meaningful relief to Americans like the Little Sisters of the Poor who do not wish to be complicit in choices that would violate their religious or moral convictions.”

“You don’t have to share the Little Sisters’ beliefs to recognize that the government should not be able to force Americans to set aside their conscience when they step outside the four walls of a church to serve the poor, heal the sick, or educate the next generation,” Israel concluded.

The Obama administration’s rule, finalized in February 2012, mandated that employers cover contraception and abortion-inducing drugs for their employees, whether or not it  went against the conscience of employers. Places of worship were left out of the mandate, but religious-affiliated groups that objected still had to bring in a third-party administrator to handle the contraception coverage.

The Trump administration’s new rule offered conscience protections for religious reasons and covers religious nonprofits such as churches. The moral exemption included in the rule covers employers who cannot provide contraceptives or abortion-inducing drugs due to their conscience and convictions, as The Daily Signal previously reported.

Rienzi is confident the Little Sisters of the Poor will prevail:

The Little Sisters will tell the judges in these new cases what they have successfully told the Supreme Court time and again, that governments do not need nuns to give out contraceptives, that our big country has room enough and space enough for diversity of ideas, that we can have both people who want contraceptives and nuns who can’t give them out and that the Constitution surely does not require the federal government to punish the little sisters or any other religious person for living out her faith.