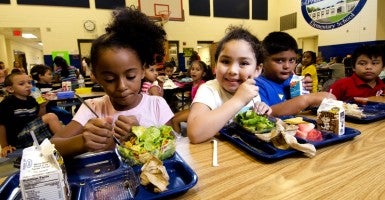 The House should end this wasteful policy, known as the Community Eligibility Provision (CEP), which makes a mockery of the federal welfare system.

Before addressing this absurd welfare scheme, it’s important to briefly address the controversial federal nutrition standards, also put into place in the 2010 law.

The House bill would tinker with these standards, effectively giving its blessing to the extremely prescriptive standards that have been widely pushed by first lady Michelle Obama.

Instead, policymakers should advance a parent-driven approach to nutrition standards. This would mean the federal government would, at most, set very nominal requirements, while allowing local school districts to set the standards that best meet the needs of their students and communities. Parents would have a chance to better shape standards because they can more effectively communicate concerns to local officials than to faceless D.C. bureaucrats.

Then there’s the community eligibility provision (CEP), which is ostensibly designed to reduce administrative burden on schools and the “stigma” associated with students who get free and reduced-price meals. Through this provision, if 40 percent of students in a school, group of schools, or a school district are identified as eligible for free meals because they receive a benefit from another means-tested welfare program like food stamps, (referred to as the “identified student percentage” or ISP), then all the students can receive free meals. This includes children from wealthy families. Means-tested welfare benefits, such as free meals, are supposed to go to those in need. CEP ignores this fundamental tenet of welfare.

There’s no apparent published support for this 1.6 number. It’s as artificial as the 40 percent threshold. By having this very high multiplier, federal taxpayers are subsidizing free meals that are very likely going to many students who are not low-income. To put this in context, if a school has an identified student percentage of more than 62.5 percent, this means that more than 100 percent of the students at the school are low-income, which is impossible. It shows the inappropriateness of using this artificial 1.6 multiplier.

What’s more, under CEP low-income area schools can help high-income area schools become eligible for federally subsidized free lunches. For example, assume a school has zero low-income students. By grouping this school with another school or group of schools that have higher identified student percentages, the school with zero low-income students can be a part of the overall group of schools that meet the necessary threshold of 40 percent so that all students at all the schools in the group receive free meals.

The House bill would take a small step in addressing the problem with CEP. It would increase the current threshold of 40 percent to 60 percent. This would help reduce the number of students from middle-class and wealthy families receiving welfare benefits. However, it continues to legitimize the idea that free meals should be given to students who are not low-income. Since the “identified student percentage” could still be based on a groups of schools, not on a school-by-school basis, low-income area schools would still be able to help high-income area schools provide free meals to middle-class and wealthy students. The House bill also doesn’t address the 1.6 multiplier.

CEP needs to be eliminated altogether. Taxpayers shouldn’t be forced to subsidize welfare benefits for middle-class and wealthy families. Usually, when welfare benefits are going to those who are not in need, this draws serious concern over mismanagement of taxpayer dollars. Just because the federal government has given its blessing to handing out free meals regardless of need doesn’t change the fact that this is still waste and abuse.