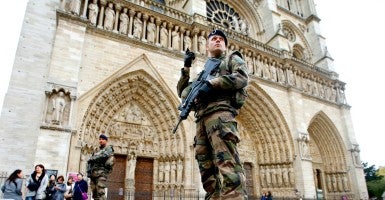 The terrorist attacks launched in Paris on Friday that killed at least 129 people have been claimed by and traced back to the Islamic State, also known as ISIS. It is one more sign that the Islamic State (which has seized territory the size of Maryland inside Syria and Iraq) poses a growing terrorist threat to the United States and its allies.

Within the last month, ISIS also has been implicated in the Oct. 31st downing of a Russian airliner over Egypt’s Sinai peninsula that killed 224 people, and a double suicide bombing attack in Beirut, Lebanon that killed at least 41 people the day before the Paris attacks.

The grocery store terrorist, who was killed by police, probably was acting as a “stray dog” (or “lone wolf”) who was not actually a member of the Islamic State, but was responding to its public calls for a wave of terrorism.

But at least 4 of the 8 terrorists involved in the latest Paris attacks had travelled to Syria to fight for ISIS. French Prime Minister Manuel Valls said that the attack was “organized, conceived and planned” from Syria.

The involvement of battle-hardened foreign fighters, as opposed to amateurish “stray dogs”, marks an escalation of the evolving threat posed by the Islamic State. The militarized nature of the operation resembled the simultaneous attacks on multiple soft targets that killed 164 people and wounded hundreds more in Mumbai, India in 2008.

Al-Qaeda’s Somali affiliate, al-Shabaab, mounted a similar terrorist attack that killed 67 people in the Westgate Mall in Nairobi, Kenya in 2013.

The suspected ringleader of the Paris attacks is Abdelhamid Abaaoud, a Belgian citizen of Moroccan descent who joined the Islamic State in 2013. Abaaoud grew up in the Brussels suburb of Molenbeek, a longtime bastion of support for Islamist extremism. He was a member of Sharia4Belgium, an Islamist extremist group that was designated as a terrorist organization this year.

Abaaoud, who may have been killed in a police raid yesterday, was known to be a close confidant of the leader of ISIS, Abu Bakr al-Baghdadi, and ran a training camp for foreign fighters in Syria. He has been linked to previous terrorist plots, including the May 2014 attack on a Jewish museum in Brussels that killed 4 people and the attack by a gunman who was subdued by three Americans on board a train bound for Paris in August.

A Growing Threat to the U.S.

The growing list of terrorist attacks mounted by the Islamic State is a sign that it is evolving fast and metastasizing. It is now using repatriated foreign fighters supported by homegrown terrorist networks to launch terrorist attacks inside Western countries.

CIA Director John Brennan warned on Monday that “I certainly would not consider it a one-off event. It’s clear to me that ISIL has an external agenda, that they are determined to carry out these types of attacks. I would anticipate that this is not the only operation that ISIL has in the pipeline.”

That same day, ISIS threatened to launch a similar attack against Washington. This is nothing new.

Islamic State leader al-Baghdadi threatened to strike “in the heart” of America in July 2012. The Islamic State reportedly has tried to recruit Americans who have joined the fighting in Syria and would be in a position to carry out this threat after returning to the United States.

Although ISIS has not yet launched a major attack inside the United States, it has inspired isolated terrorist attacks by self-radicalized “stray dogs” who have acted in its name, such as the May 3, 2015, foiled attack by two Islamist extremists who were fatally shot by police before they could commit mass murder in Garland, Texas.

ISIS later claimed responsibility for that attack and warned “future attacks are going to be harsher and worse.”

The U.S. Response to ISIS

President Obama, who proclaimed the day before the Paris attacks that the Islamic State was “contained,” needs to reassess his slow motion, half-hearted, incremental response to what he once derided as a “J.V. team” of terrorists.

The White House needs to end its timid micromanaging of the war against ISIS and allow the Pentagon to mount a more robust military campaign, with much more intensive air strikes, expanded deployments of special operations forces, and advisers embedded with the Iraqi army, Kurdish militias, and Sunni Arab militias operating much closer to the battlefront.

The administration needs to do a better job of cutting off the flow of foreign fighters to and from Syria and Iraq by working closely with U.S. allies, especially Turkey.

The administration should also develop a plan to properly screen and vet any Syrian refugees allowed into the country. At least one of the Paris terrorists reportedly entered France from Greece after being accepted as a refugee.

Above all, the United States needs a competent commander-in-chief able to formulate and implement a comprehensive strategy for defeating ISIS. The Obama White House has consistently been behind the curve in dealing with the surging ISIS and disintegration of Syria and Iraq.

The Paris terrorists are harbingers of a new generation of terrorists operating more brazenly against a wider set of soft targets than in the past.

The next attack could come in an American city unless the Obama Administration drops its passive complacency and takes much stronger action against the Islamic State.

For more information on this topic, please see: A Counterterrorism Strategy for the “Next Wave”