Q&A: What You Need to Know About ISIS in Iraq 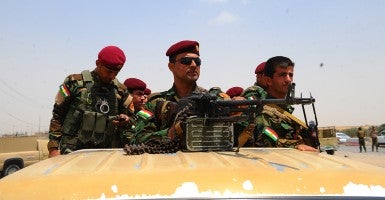 ISIS: 'A revolutionary movement that uses terrorism to impose its will.' (Photo: Transterra Media/Polaris/Newscom)

Four letters are topping headlines around the world: ISIS. Pinned at the center of the crisis in Iraq, it’s hard to read or watch the news without hearing the name.

Despite shaking up global security, the group remains a mystery to many Americans. So who are they?

The short answer:  the Islamic State of Iraq and Syria (or al-Sham). But that doesn’t even begin to scratch the surface of this complex, brutally violent terrorist group.

In an exclusive interview with The Daily Signal, The Heritage Foundation’s expert in Middle Eastern affairs, James Phillips, breaks down the basics of ISIS, explains how they came to power, and discusses the threat they pose to Americans both at home and abroad.

The Daily Signal: First off, who and what is ISIS?

Phillips:  The Islamic State of Iraq and Syria is an al-Qaeda offshoot that seeks to overthrow the governments of Iraq, Syria, Lebanon, and Jordan, and establish an Islamic state governed by a harsh and brutal interpretation of Islamic law. Its long-term goals are to launch a jihad (holy war) to drive Western influence out of the Middle East, destroy Israel and become the nucleus of a global Islamic empire.

It is composed of Sunni Muslims drawn to radical Islamist ideology. Most of its members are Iraqi and Syrian Arabs, although it has attracted a wide range of foreign militants, especially Arabs from Saudi Arabia, Jordan, Libya, Yemen, and Egypt.

Q: How long has ISIS been around and why are they just now on the move?

A: The group initially was established in Iraq in 2004 by Abu Musab al-Zarqawi, a Palestinian Islamist extremist born in Jordan, who formerly was one of the estimated 25,000 foreign Muslims who flocked to Afghanistan after 1979 to fight the Soviets. He was a close associate of Osama bin Laden, although he did not formally join al-Qaeda until 2004 when he was recognized as the leader of al-Qaeda in Iraq.

Zarqawi was killed in a U.S. airstrike in 2006 and his organization was decimated by a U.S.-led counterterrorism campaign. But the group made a comeback in Iraq after the withdrawal of U.S. troops in 2011, which took the pressure off it. Also, Iraqi Prime Minister Maliki’s Shia-dominated government alienated Sunni Iraqis, driving many of them to see ISIS as the lesser evil.

Q: So what exactly is ISIS trying to accomplish?

A: ISIS is a violent Islamist extremist group that is determined to impose its harsh totalitarian Islamist ideology on all Muslims, kill off apostates (defined as all Muslims that do not accept its brand of Islam), subjugate all non-Muslims and build a radical Islamic state that will launch an unending jihad until it has created a global Islamic empire. It is a revolutionary movement that uses terrorism to impose its will.

Q: What about these reports of ISIS beheading and crucifying their fellow Muslims?

A: ISIS proudly videotapes and broadcasts its brutal treatment of its enemies and those who violate its radical interpretation of Islamic law. It has cited the Koran to justify beheading and crucifixion. Its victims reportedly are usually killed first before being strung up for display on a cross.

Q: How do they compare to groups we’re more familiar with, like al-Qaeda and the Taliban?

A: ISIS began as an affiliate of al-Qaeda before it broke away from the core al-Qaeda leadership in 2013 in a dispute over leadership of the jihad in Syria. It now rejects the leadership of Bin Laden’s successor, Ayman al-Zawahiri, who criticized its extreme brutality, which has alienated many Muslims.

This is a dispute about tactics, but not long-term strategy. It may also be prompted by a personal rivalry between Zawahiri and ISIS leader Abu Bakr al-Baghdadi, who may see himself as Bin Laden’s true successor. ISIS shares a common ideology with its al-Qaeda parent and Taliban cousin.

Q: How does Syria and the rest of the region fit into the picture?

A: ISIS carved out a sanctuary in Syria after the beginning of the Syrian rebellion in 2011.  Many of its members belong to Sunni Arab tribes that straddle the Iraq-Syrian border. It has launched attacks in Jordan, Lebanon and seeks to attack Israel, which it has pledged to destroy. Although its ideology is repellent to many Muslims, it has exploited the sectarian civil wars in Iraq and Syria to advance its own power.

Q: How big of a threat is ISIS to Americans, both at home and abroad?

A:  ISIS leader Baghdadi threatened to launch attacks in the “heart” of America in 2012. ISIS has been recruiting foreign Islamist militants, including Americans and Europeans, who have flocked to the jihad in Syria. These recruits pose a potential threat to Americans abroad and to the U.S. homeland. Unfortunately, ISIS is on the verge of creating a huge terrorist sanctuary in western Iraq and eastern Syria, which will be a greater threat to the U.S. and its allies than Afghanistan was before 9/11.