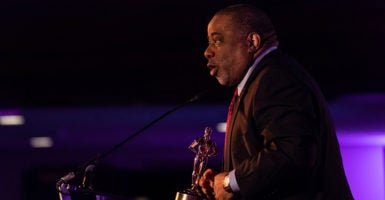 The Trump administration hopes to improve its communication with representatives of black media outlets such as syndicated columnist Raynard Jackson, pictured May 24, 2018, accepting the New Media Journalist of the Year award at the third annual Multicultural Media Correspondents Dinner at the National Press Club in Washington. (Photo: Cheriss May/NurPhoto/Getty Images)

The White House plans to ramp up communication with black media outlets as the administration seeks to amplify President Donald Trump’s record for African Americans.

Press secretary Stephanie Grisham and other top Trump administration spokespersons met with the executive board of the National Newspaper Publishers Association for an hour Friday in the vice president’s ceremonial office next door to the White House, participants said.

“They committed verbally to further talk and to break down some of the red tape,” Terry B. Jones, CEO and publisher of the New Orleans Data News Weekly, told The Daily Signal of the meeting in the Eisenhower Executive Office Building.

“If they follow through on what was said, it could create a new means of communication,” Jones said.

Jones, the association’s region 4 president, acknowledged that Trump has been cast as unfriendly to black Americans. But, he said, readers want to know each side.

“The Republican Party used to be our party,” Jones said. “Our African American readers are independent thinkers. So it is appropriate for all sides to reach out to communicate.”

Jackson, founder of a conservative super PAC called Black Americans for a Better Future, teamed with another Trump supporter, the Rev. Mark Burns of the Harvest Praise and Worship Center in Powdersville, South Carolina, to arrange the meeting with administration officials.

“There were misperceptions on both sides, and we all had more in common than differences,” Jackson told The Daily Signal. “This administration has a good story to tell to the black community and it wants to speak directly to the black press.”

Jackson said the White House rearranged schedules and was enthusiastic about setting up the meeting. He said participants agreed it would be the first of many meetings, either in person or by phone.

“A lot of black newspaper publishers are Republicans, but black newspapers don’t always get their calls returned by Republican politicians, because Republicans sometimes see it’s a black media outlet and think it’s going to be a hit piece,” Jackson said.

Grisham told the newspaper publishers that the White House doesn’t expect glowing stories—but hopes to get the administration’s perspective in their newspapers, and a White House response to any critical stories. She also pledged to be more responsive to inquiries, Jackson recalled.

The new outreach is a means for the Trump administration to cut through the “mainstream media noise” about Trump and highlight the administration’s record on black employment, criminal justice reform, funding for historically black colleges and universities, and enterprise zones, Burns said.

Some of the newspapers represented have had access problems with the White House, Burns noted.

“One of the points made in the meeting by the publishers is if we don’t have communication with the White House, all we have to go on is what’s reported on CNN and MSNBC,” Burns told The Daily Signal. “So the White House understands combating the disinformation against the president means a reaching out to African American media.”

Black Americans’ support for the president is growing, even if it’s not entirely evident, he said.

“So many black people privately support this president, but because the mainstream media paints him as racist, they are afraid to speak up,” Burns said. “But many African Americans see with their own eyes what he has done.”