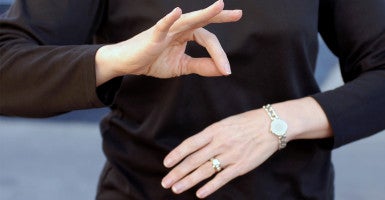 Arricka Nowland is no stranger to fees.

It’s all a part of Maine’s occupational licensing agenda, or the process by which the state regulates workers, seeking to protect consumers’ health and safety interests as well as provide benefits to workers.

In total, Nowland pays nearly $1,000 per year just to be able to work part-time. Of the 39 moderate-income professions in Maine listed in a 2012 report on occupational licensing by the Institute for Justice, interpreting is the second most expensive job. The first is Cathodic Protection Testers, individuals who ensure corrosion is not affecting various metallic structures, who pay roughly $1,500 per year in fees.

Other jobs that require payment of a significant fee in Maine include athletic trainers ($521 per year), tank testers ($400 per year), and auctioneers ($396 per year).

“Part-time moms, or people who have other jobs and are doing things like interpreting on the side, or that sort of thing, then it almost, it doesn’t become worth it,” says Nowland, who herself splits time between interpreting and caring for her young daughter. “And I don’t feel like how much I’m paying is coming back to me in any way … it feels like it’s not fair.”

Indeed, Nowland insists, the $250 she pays to Maine for state re-certification yearly does little more than guarantee her a piece of paper she needs to be able to work for governmental organizations like vocational rehabs, events hosted by the Department of Health and Human Services, or in public schools. Those gigs make up “a fair amount of the work available,” she says.

“More than one-quarter of U.S. workers now require a license to do their job, with most of these workers licensed by the States,” the report writes. “The share of workers licensed at the State level has risen five-fold since the 1950s.”

Economist Salim Furth, a research fellow in Macroeconomics at The Heritage Foundation, agrees the fees are detrimental to a sector of the population that, if anything, cannot typically afford to take unpaid leave to satisfy governmental requirements.

“Daycare workers in Maryland, for example, not just to get certified to start working, but to remain working, have to take a day off unpaid leave, because they don’t have paid vacation, and spend a couple hundred dollars which they certainly cannot spare to sit in an auditorium with six or seven-hundred people listening to speakers tell them things they already know about their job,” Furth says.

“I understand people want background checks [when they’re leaving their children in the care of others], but these workers are people who really have a hard time in the labor market, and we’re taking a couple hundred of their dollars every year,” he adds.

While Nowland says she acknowledges the importance of licensure (she mentions states like New York that do not require licensure often have an abundance of well-intentioned but occasionally incapable people posing as skilled workers), Nowland wants to know why there is not a tapering off of fees after an initial stringent certification process.

“In theory, occupational licensure is a good idea,” says Nowland, who has been an interpreter since 2007 and, in Maine, since 2009. “But in Maine, when [the state] began advocating for licensure, at the time your fees had to cover the administrator hired to process the paperwork’s hours. At the time, lets say there were 40 interpreters who paid $250 per year. Well, now we have 126 interpreters in the state of Maine, and we’re all still paying the fee.”

For Nowland’s part, she is particularly troubled by the mandatory continuing education classes she must sign up to take. At ten dollars per hour, to meet the 80-hour state requirement, she will spend $800 on education over a five-year period.

“To prove that you have done the CEUs, they just have a yes or no question that you check,” Nowland says. “You don’t even have to prove anything, and there is no follow through. They’re just trusting you’re honest when you say yes.”

Nowland acknowledges that not every profession in Maine is as burdened as interpreting. She has a friend, she says, who only needs to spend roughly $50 per year to work as a masseuse. But interpreting has always been a passion, despite having no family members or friends who are deaf.

“I was always interested in interpreting and working with the deaf even from a young age,” she says. “I decided to become an interpreter when I was a teenager … these organizations, they just don’t support me.”