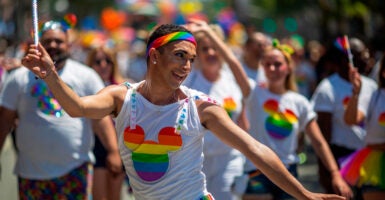 Pride Month, a celebration of the LGBTQ lifestyle, occurs each June, and for years now, mainstream corporations with recognizable brands have participated in Pride Month by marketing special products, often festooned with the rainbow flag, the primary symbol of the LGBTQ community.

This year is no exception, but there’s been an uptick in brands targeting the marketing of their LGBTQ Pride Month products toward kids. Corporations can generate plenty of business without using their brands to target young children on an issue that’s beyond their limited scope of understanding.

On May 20, Lego, the iconic Danish brand that markets building blocks to children, unveiled a LGBTQ-themed Lego set.

While the play set itself doesn’t say anything specifically about promoting LGBTQ culture, the rainbow-themed Lego figures make it obvious. But lest anyone miss the message, Lego made it clear in a tweet.

It’s disappointing to see a brand like Lego, whose users are almost exclusively children, market Pride Month to kids. Lego—named for the Danish phrase “leg godt,” which means “play well”—makes bricks and figurines for children.

The faceless, genderless figures representing the colors of the rainbow flag symbolizing LGBTQ pride are inappropriate for young children, who likely aren’t even yet curious about sex, gender identity, or any other subject of the kind.

Disney’s all-star characters from Pixar, Marvel, and Star Wars don the rainbow apparel, too. If that’s not enough, like Lego, the Walt Disney Co. is donating part of its proceeds to organizations that support LGBTQ communities and causes.

Also like Lego, Disney’s theme parks, films, and products are mostly geared toward children, their happiness, and the fantasy of being a child forever.

Politics aside, LGBTQ issues comprise complex ideas about gender and sex, which should be adults-only topics. Not only are they inappropriate for kids, they’re also unrelated to—indeed, antithetical to—the magic, wonder, and innocence of childhood the Disney brand purports to embody.

Even food brands that kids enjoy are jumping aboard the Pride train. For the second year in a row, Mars Wrigley North America is releasing limited-edition Skittles Pride Packs, which feature gray packaging on the outside and all gray candies inside. “Only one rainbow matters during Pride,” the packaging says. The brand is donating $1 per package, up to $100,000, purchased in June to the LGBT advocacy group GLAAD.

Kellogg’s, the maker of iconic cereals such as Frosted Flakes (think Tony the Tiger) and Froot Loops, has collaborated with GLAAD and released a “Together With Pride”-themed cereal with the slogan “Boxes are for cereal, not for people.”

“Together With Pride cereal marks the latest chapter in a years-long partnership with GLAAD and is the evolution of the much-loved All Together cereal, which previously was only available online,” Doug VanDeVelde, general manager of Kellogg U.S. Cereal Category, said in a statement. “Our delicious new recipe features berry-flavored, rainbow hearts dusted with edible glitter. We can’t wait for fans to try our latest limited run.”

Proponents of brands targeting children for LGBT Pride Month insist the endeavors are innocent and meant to instill love and equality in people as early as possible, but that’s unnecessary. Children are inherently far less biased than adults. They tend not to need encouragement to accept people.

Pride Month, and particularly the parades that are staged nationwide throughout the month, often feature drag queens, whose appearance would be confusing to most children. The inherently sexual nature of LGBTQ issues makes the topic inappropriate for children who have yet to understand, let alone wonder about, their own gender, sex, or identity.

Corporations can and do utilize their popular brands to make money, but they shouldn’t be targeting children in their efforts to tie in to Pride Month.