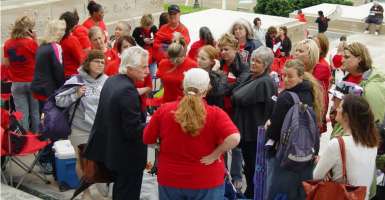 Teacher unions in Louisiana are among those fighting 'pauroll protection' measures. (Photo: Louisiana Federation of Teachers and School Employees Facebook)

Proposals to stop state and local governments from deducting union dues from their employees’ paychecks are likely to gain traction in coming months, those on both sides of the issue say.

Such “payroll protection” measures arise as the U.S. Supreme Court is set to decide next year on a free speech challenge to rules compelling government workers to pay union dues in the first place.

In interviews with The Daily Signal, labor policy analysts, business representatives, and free market proponents said they see the unions operating at an unfair advantage over political opponents.

Even if the Supreme Court strikes down mandatory union dues on constitutional grounds, they predict, teacher unions will remain a potent political force.

That much is evident in Louisiana, where state Sen. Danny Martiny (R-Jefferson) and state Rep. Stuart Bishop (R-Lafayette) have submitted legislation (SB204 and HB418) to put an end to the practice of deducting government union dues from paychecks. Louisiana is one of 25 right-to-work states.

Louisiana has been right-to-work since 1973, and all the dues collected are voluntary. There is nothing to protect. The phrase is used because it’s a hot button item, but it’s entirely misleading.

If the Martiny-Bishop version of “payroll protection” were to prevail in Louisiana, unions would become responsible for directly collecting membership dues. The measure passed out of the House Committee on Labor and Industrial Relations but did not come to floor votes in either the House or Senate before the legislative session ended.

In an interview, Martiny told The Daily Signal that he expects the bill to be reintroduced in some form next year. But, he said, unions have proven themselves adept and effective at blocking various versions of “payroll protection” proposed in Louisiana over the past few years. He anticipates another tough fight in 2016.

They take political stands and they lobby for policies and endorse candidates. So I don’t see why the government should pick up the cost of collecting the money for the union. It seems to me like the individual employee and the unions could make their own arrangements. Anyone who doubts the power and influence of teacher unions in right-to-work states should take a hard look at tactics employed by union operatives in Louisiana, suggests Kevin Kane, president of Pelican Institute, a free-market think-tank based in New Orleans.

Kane’s organization published a report, “The Louisiana Teacher Union Paradox,” describing how two unions—the Louisiana Association of Educators and the Louisiana Federation of Teachers and School Employees—worked to obstruct school choice initiatives and retaliate against “pro-reform legislators” through legal action and recall petitions.

Although the Louisiana unions may not have as much muscle as the teacher unions in states with agency shop rules, the Pelican report finds they operate at a financial advantage over political opponents in the absence of payroll protection. It reads:

The unions remain viable in part because taxpayer-supported governmental bodies, i.e. school board offices, collect and remit union dues to them. With automatic payroll deduction, which is authorized in Louisiana statute, many teachers are unaware of the total amount they are paying in dues, and what portion of those dues go to support political candidates they may not even be personally supporting.

Payroll protection bills would go a long way toward “leveling the playing field” between union leaders and state residents, including rank-and-file teachers, who are opposed to the unions’ political agenda, Kane argues.

“You have to ask yourself why the unions pour so many resources into defeating payroll protection every time it comes up,” Kane told The Daily Signal, adding:

The bills would not prevent the unions from collecting dues or getting involved in politics. They [unions] can do everything they do now. They would just have the added responsibility of collecting their own dues. But every membership organization has to collect their own dues. The idea that government would step in and collect the dues for you is very unusual, and it speaks to the influence unions have with government.

“I think this prospect is what really concerns the unions,” he said.

Where Kane sees an effort to level the playing field, though, union officials see the hand of “big business” moving to silence average citizens.

“These bills were specifically aimed at unions, and they were introduced to disrupt union membership,” Landon, the LFT spokesman, told The Daily Signal. “This was just a political gambit that has nothing to do with protecting the public.”

All of the money that is collected is voluntarily contributed by the teachers and other school employees. This is not an issue of protecting anything. This is really about big business trying to get an unfair advantage over working people when it comes time for their voices to be heard in the [Louisiana] State Capitol. Under California’s agency shop rule, teachers don’t have to join the union but must pay what amounts to union dues.

The teachers who took legal action argue that they’re forced to pay for political activism at odds with their policy preferences. If they prevail at the Supreme Court with the high-profile suit, Friedrichs v. California Teachers Association, it essentially would mean every state would become a right-to-work state.

“We could begin to see legislative jockeying of all kinds that accounts for the fact that the Supreme Court appears to be moving rapidly away from compulsory union dues,” Terry Pell, president of the Center for Individual Rights, told The Daily Signal. “What’s happening in Louisiana could raise some interesting questions about what happens in other states after Friedrichs is decided.”

The Center for Individual Rights, a Washington, D.C.-based public interest law firm, represents the California teachers who brought the suit.

Although those teachers technically are permitted to opt out of the political portion of their dues, they contend that the process is cumbersome and burdensome.

The teachers also argue that the collective bargaining has become laced with political overtones to the point where it is more difficult to distinguish between “chargeable” union expenses and those members may opt out of, the so-called  “nonchargeable” ones.

Vincent Vernuccio, director of labor policy at the Mackinac Center for Public Policy, a free-market think-tank in Michigan, is sympathetic toward the idea of payroll protection since it  can “warm the waters for labor reform.”

Vernuccio said he also would like to see state lawmakers consider  “worker’s choice” initiatives designed to free government workers from forced union representation but also free unions from providing services to employees who prefer not to be part of the union.