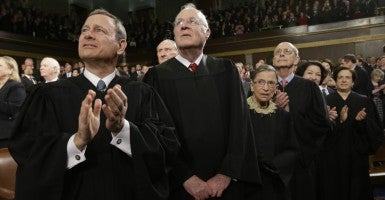 The new term for the Supreme Court is gearing up to begin on Oct. 5.

Clement and Blatt, who have collectively argued more than 100 cases before the Supreme Court, gave a preview of the cases to be argued in this term.

One case, Evenwel v. Abbott, looks into the issue of voter population and state districting—i.e., does a state set districts by the census population or the number of eligible voters?

In this case, Texan Sue Evenwel argues that her vote in the state of Texas does not have equal weight compared to voters in other Senate districts. Some districts may have the same actual population yet fewer registered voters.

Under the 14th Amendment’s Equal Protection Clause, “one person, one vote” is guaranteed.

A 1964 ruling from Reynolds v. Sims upheld that the Alabama Legislature must be represented on a population basis for districts.

Blatt suggests that Evenwel is an issue involving rural versus urban areas. She noted a previous case, Burns v. Richardson from 1966, that ruled it okay for Hawaii to reapportion districts by eligible voters.

The Supreme Court has ruled in the past to let states determine the best method to draw district lines. At The Heritage Foundation Tuesday, former U.S. Solicitor General Paul Clement (above) and law professor Lisa Blatt described cases the Supreme Court will be hearing when it begins its 2015 term on Oct. 5. (Photo: Jonathan Ernst/Reuters/Newscom)

Another case previewed by Clement and Blatt was Friedrichs v. California Teachers Association. This case is an issue of public-sector unions.

The 1977 decision, Abood v. Detroit Board of Education, upholds an “agency shop law” that ruled that public employee unions can require employees to pay fees even if they are non-union members.

A group of California teachers are calling for the overrule of Abood and to allow for individual teachers, along with other public-sector employees, to make the decision whether or not to join a union. The First Amendment rights of free speech and association are in the mix of discussion for this case.

Clement explained that currently there is an “opt-out” option for paying fees that go toward political activity. The teachers have to file for a refund if they choose this option.

An overrule of Abood would mean that an “opt-in” option to pay the fees would be available.

This case has been on an “express track,” moving quickly through the lower courts to get to the Supreme Court. Clement said that there is a “pretty high” chance that the Supreme Court will reconsider Abood.

Other cases discussed include Fisher v. University of Texas at Austin, which looks at racial preference as a factor when colleges determine admission for students; Little Sisters of the Poor v. Burwell, which looks at religious liberty rights when dealing with a government conception mandate; and a case involving the death penalty—two brothers, in cases Kansas v. Carr and Kansas v. Carr, were tried together, but the Supreme Court will consider whether they should be sentenced on separate hearings.

“This term, the court will hear significant cases involving unions, voting rights, the death penalty, and racial preferences, in addition to the possibility of taking up another challenge to Obamacare’s contraceptive mandate, cell phone location data, abortion, and solitary confinement,” wrote Elizabeth Slattery, a legal fellow at The Heritage Foundation.

The Supreme Court has already agreed to hear 34 cases and will announce more cases for this term on Sept. 28 at an opening conference.