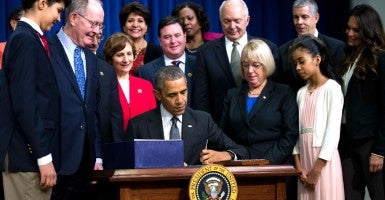 “It’s like Christmas Day,” exclaimed Lily Eskelsen García, president of the National Education Association, the nation’s largest teachers union. García was referring to passage of the Every Student Succeeds Act (ESSA), which was signed into law by President Barack Obama—who similarly referred to the new law as a “Christmas miracle”—earlier Thursday.

On Wednesday, the U.S. Senate passed the measure, which reauthorizes the Elementary and Secondary Education Act (ESEA), the most recent iteration of which was No Child Left Behind. The Every Student Succeeds Act passed the Senate by a margin of 85-12 and in the U.S. House by a vote of 359-64 in late November (this included every Democrat who voted in both the House and Senate).

According to Politico, “victory certainly didn’t just land in the laps of union leaders. The National Education Alliance and the American Federation of Teachers are on track to spend $3.7 million combined lobbying Capitol Hill before 2015 is done.

“The National Education Alliance calculates that it has held 2,300 face-to-face meetings with lawmakers this year. Members have sent 255,000 emails to Capitol Hill and made 23,500 phone calls, according to NEA’s calculations.”

Politico goes on to report:

In February, it spent $500,000 on an ad buy targeting Senate HELP Committee members’ districts, calling on them to replace the law… the AFT calculates it had 200 in-person meetings with lawmakers, made 125,000 phone calls and submitted more than 20,000 online comments to members of Congress.

The proposal’s elimination of Adequately Yearly Progress (AYP) has rightly drawn the support of the vast majority of analysts and education stakeholders. AYP was the overly prescriptive federal mandate that undergirded the foundation of No Child Left Behind; it required that all students achieve proficiency by the 2014-15 school year or have a state risk federal sanctions. In addition to eliminating AYP, the new law also eliminates the so-called “highly qualified teacher” provision, which established federal credentialing requirements for teachers. Yet the law’s policy bright spots end there, and they are overwhelmed by the prescriptions, programs, and spending that remain.

Although the law consolidates some programs, it does not eliminate any program funding, it and creates several new significant federal programs, including:

And most notably, perhaps, are all of the missed opportunities to advance conservative policy, and policy that would actually empower parents:

Although it may be an early Christmas present for the president and the teachers unions, for those interested in empowering parents and genuinely reducing federal intervention in education, the Every Student Succeeds Act leaves much to be desired.