History Lesson: Opposition to Export-Import Bank Has Grown Over Time 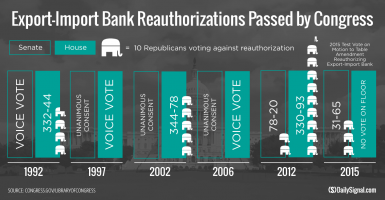 Supporters of the Export-Import Bank cheered last week when the majority of United States senators voted in favor of reauthorizing the embattled agency. However, the vote also demonstrated growing opposition to the bank among Republican senators—a trend that has evolved in recent years.

Since 1992, opposition to Ex-Im has grown substantially among Republicans in the House and the Senate. While, in the past, passage of the bank’s reauthorization in the Senate was typically with unanimous consent or voice vote, the last two votes concerning the bank show wavering support from GOP senators.

Similarly, in the House, opposition to the bank from GOP members has continued to grow.

The Senate held a “test” vote on Wednesday that measured support for Ex-Im’s reauthorization. Sixty-five senators voted against the motion, which would have tabled an amendment reauthorizing the bank for another five years. Thirty Republicans and Independent Sen. Bernie Sanders of Vermont voted to set the amendment aside.

Two Republicans, Sens. Marco Rubio of Florida and Pat Toomey of Pennsylvania, did not vote. However, both Rubio and Toomey have publicly opposed the bank.

“This will be a signal to the markets that the Senate is in support of the bank,” Sen. Lindsey Graham, R-S.C., one of Ex-Im’s biggest supporters, said Wednesday.

Both Democratic and Republican senators voting in favor of Ex-Im’s reauthorization touted the vote as a win for the embattled agency. Ex-Im’s charter expires June 30, and the agency has been a point of contention between Republicans and Democrats in the House and Senate who disagree over whether its life should continue.

The Daily Signal analyzed Ex-Im’s reauthorizations from 1992 through the Senate’s vote last week to track how support for the bank has changed.

>>> What Happens If the Export-Import Bank’s Charter Expires?

In the Senate, reauthorization was passed through unanimous consent, or with no objection, from 1992 to 2006. Then, in 2012, senators went on record in voting for legislation sponsored by Rep. Gary Miller, R-Calif., that reauthorized Ex-Im through Sept. 30, 2014. Nineteen Republican senators of the 46 that voted opposed the bank’s reauthorization.

In the House, opposition to Ex-Im has steadily grown among Republicans, as well.

The lower chamber held roll call votes on reauthorization in 1992, 2002 and 2012. This year, the House hasn’t yet voted on a measure addressing Ex-Im’s future.

Republicans in the House, particularly, have begun pushing back against Ex-Im’s reauthorization in recent years.

Approximately 30 percent of Ex-Im’s transactions benefited Boeing in 2013, and because of the bank’s continued support of the airplane manufacturer, Ex-Im earned the nickname “Bank of Boeing.”

This year, Hensarling chose not to bring a bill reauthorizing the bank through his committee, though he has held a number of hearings on Ex-Im’s future.

Additionally, Senate Banking Committee Chairman Richard Shelby, R-Ala., said he was open to letting the bank expire and decided not to bring a reauthorization bill before his panel.

“I don’t see any crying-out need for a markup,” Shelby told reporters last week. “After two days of hearings, it exacerbated some of my concerns.”

As policymakers on Capitol Hill have been debating the bank’s future, Ex-Im officials revealed that there are currently 31 open fraud investigations and the potential for more indictments stemming from Ex-Im transactions.