This State Benefits Big From the Export-Import Bank. Want to Know Why? 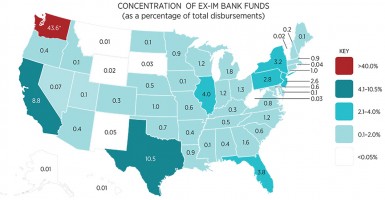 The home state of Boeing’s airplane division benefits the most from financing by the U.S. Export-Import Bank, and by a huge margin, a state-by-state analysis shows.

Using public data from the Export-Import Bank, a researcher at George Mason University analyzed the proportion of the federal agency’s disbursements each state received over the past seven years.

Washington state  got the highest concentration of Ex-Im funds, according to the findings by Veronique de Rugy, senior research fellow at GMU’s Mercatus Center.

From 2007 to 2014, about 44 percent of the agency’s financing went to the Evergreen State, home to the commercial airplane division of Boeing, the aerospace giant that also is the agency’s largest beneficiary.

Texas and California accounted for 10.5 percent and 9 percent, respectively, of Ex-Im’s total disbursements since 2007.

The energy and aviation sectors — including Boeing — benefited most from Ex-Im financing in the two states.

Only in Washington, California and Texas do the subsidies make up a detectable proportion of export financing. And in those cases, the corporations that would be affected by expiration of the bank could easily access private financing to maintain their sales.

The 80-year-old agency provides taxpayer-backed loans and loan guarantees to foreign countries and companies. Its charter expires Sept. 30, and Congress is debating whether to reauthorize the bank or allow its life to end.

“While businesses in most states barely benefit from the Ex-Im Bank at all, their taxpayers are just as exposed to Ex-Im Bank liabilities as taxpayers in states that receive the most Ex-Im Bank backing.”

Katz wrote in a July commentary that only 2 percent of total U.S. exports involve Ex-Im financing. As of March, the agency devoted $32 billion of its total portfolio to wide-body jets, the vast majority benefiting Boeing.

In addition to examining the concentration of Ex-Im funds across all 50 states, the District of Columbia, and Puerto Rico, de Rugy determined the percentage of state exports backed by the agency from 2007 to 2014. Washington state, once more, clearly benefited the most from Ex-Im financing, with 23 percent of exports backed by the agency. Wisconsin and Massachusetts followed, with 4 percent and 3.6 percent, respectively.

In 41 states, about 98 percent of exports had no Ex-Im backing, prompting de Rugy to note:

The Ex-Im Bank yields negligible benefits for the vast majority of state exports. But the concentrated benefits it yields to a few beneficiaries makes the reforms necessary to prevent widespread losses that much harder.

Opponents of Ex-Im argue that the bank is the picture of corporate welfare and cronyism, and long ago dubbed the agency the “Bank of Boeing.”

Supporters contend Ex-Im helps small business compete in the global market and creates jobs in the United States. Many say businesses benefiting from the agency’s financing would feel the squeeze if Congress chose not to reauthorize it.

Katz points out that in reality few exports benefit from the bank:

Proponents of Ex-Im would like us to believe that American businesses just cannot survive without the bank’s taxpayer subsidies. But as this data clearly shows, Ex-Im financing benefits a tiny, tiny proportion of exports in nearly all states.