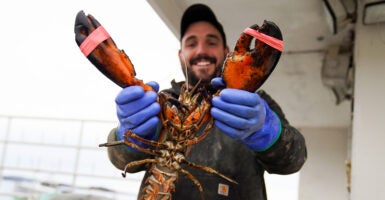 A lobsterman displays his catch at a dock in Stonington, Maine, on Feb. 4. According to the Phase One trade deal, China promises to purchase more agricultural products from the United States, including lobsters. (Photo: Wang Ying/Xinhua/Getty Images)

There’s a lot of media coverage of what U.S.-made goods China is supposed to be buying as a part of the administration’s trade deal with China (aka the “Phase One” deal). But the deal covers only about two-thirds of U.S. annual exports to China.

Last year, the U.S. exported $106 billion worth of goods to China. About $68 billion worth of those exports are covered in the Phase One deal, and China has agreed to purchase more than double that over the next two years.

But what about the goods China won’t be buying more of? What about the other $38 billion worth of goods U.S. exporters normally sell to China?

The biggest items that were left out of the deal were civilian aircraft, engines, and parts, which the U.S. exported more than $10 billion worth of to China last year.

Nonetheless, those are goods Americans work hard to create and sell when and where they can.

The administration has given no indication of whether more purchases will be included in the second—Phase Two—deal with China. It has indicated that Phase Two is to include more structural issues, like dealing with China’s government support for its industries.

But even then, Phase Two negotiations are a long way off.

In fact, the administration isn’t even thinking about Phase Two right now.

That makes sense, given that Phase One was just signed in January. Negotiations will likely have to wait until 2021, and progress on Phase One is measurable. But it also means Americans will have to continuing paying high tariffs on imports from China.

The administration has said tariffs on $370 billion worth of imports from China will remain until Phase Two is finished.

But even then, the administration’s lead negotiator is no longer sure what the goal of the past three years of the U.S.-China trade war has become.

“I don’t know what the end goal is,” U.S. Trade Representative Robert Lighthizer said. “Right now, we need to stop an aggressive force.”

At one time, the administration’s goal was closing the trade deficit with China, which is a dubious objective, given the value that both exports and imports bring to the U.S. economy.

Nevertheless, if the administration wanted the Chinese to buy more U.S. goods, why not ask them to buy more of all U.S. exports, instead of picking winners and losers?

Better yet, why not focus on the sort of structural trade liberalization in both the U.S. and China that would raise overall volumes of trade, a measure that has declined since 2016?

Now that would be a Phase Two worth having.