How Obama’s Trade Deal Unraveled in the US House 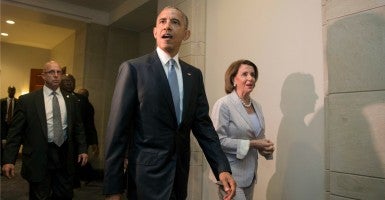 President Obama’s last-minute push to whip votes for his trade bill backfired Friday as the House of Representatives killed a related measure providing aid to workers displaced by trade. The legislation was critical to the president’s pursuit of greater authority to negotiate trade agreements.

The 126-to-302 vote marked a failure for Obama after forging an unusual alliance with House Republicans. Skeptical Democrats argued the bill authorizing Trade Adjustment Assistance was funded through cuts to Medicare and would accelerate job losses.

“Our people would rather have a job than trade assistance,” House Minority Leader Nancy Pelosi, D-Calif., said before the vote. “Whatever the deal is with other countries, we want a better deal for America’s workers.”

“The Democrats are very good at talking about how much they care about the fight for working men and women who have been displaced and they didn’t send that message today, they did quite the opposite,” Dent said in an interview with The Daily Signal.

Trade Adjustment Assistance was used as an attempt to entice Democrats to support a second bill central to the trade deal. TAA, as it’s known, would have provided job training and relocation allowances for those who lose their jobs because of increased international trade.

Democrats didn’t go for the ploy and instead struck a blow to a program they typically support, bucking Obama’s 40-minute plea for passage just hours before the vote.

Obama came to the Capitol today to plead his case for #FastTrack & #TPP. While I share many of his values, I know this is wrong for America!

#TPP is a great deal if you’re a multinational corporation + dangerous if you’re the rest of us. I’m voting ‘no.’ pic.twitter.com/DcRiHHD4jC

Voting to #StopFastTrack. Let’s start over and instead put American workers and business in a position to succeed in the global economy #TPA

“Overall, little empirical evidence supports the notion that TAA spending helps displaced workers. In fact, TAA participants are more likely to have lower earnings after participating in the program,” they wrote in a Heritage report.

The opposition left the president and GOP House leadership reliant on Democratic support in order to press forward with the meat of the deal: Trade Promotion Authority.

That bill would have allowed the president and his successors to negotiate international trade deals without the threat of Congress amending or filibustering those deals. Known as fast-track trade authority, Congress is solely given an up-or-down vote on the trade deals.

If we stay on the sidelines, our allies will gravitate towards China, away from us & our workers: http://t.co/Jfpq79ubfh #TPA4USjobs

TPA is ‘Congress asserting its prerogatives, its authority, in how trade agreements are done.’ http://t.co/wR8XHqHd8f #TPA4USJobs

Though Republicans moved forward with a vote, which passed 219 to 211, the failure of Trade Adjustment Assistance left the president without the win he was hoping for Friday. The two bills are contingent on each other to mirror the Senate’s version.

“Democrats made clear they did not value TAA and Republican leaders should not attempt to save the egregiously ineffective welfare plan,” said Dan Holler, communications director for Heritage Action. Holler’s remarks align with many conservative lawmakers who rejected Trade Adjustment Assistance as a necessary piece of fast-track trade authority.

Despite today’s outcome, the trade deal is not dead yet. The House may meet in conference with the Senate to strike TAA from the conjoined bill or it can bring TAA back to the floor for another vote. If the second path is taken, a vote would likely occur Tuesday.

The passage of Trade Promotion Authority does not guarantee the partnership, but brings the president a step closer to securing a deal.

“The House Democrats are going to have to reconsider their opposition to TAA, and maybe some Republicans, too,” Dent said. “Opening markets is an imperative for greater economic growth and it would be a terrible thing to lose the enormous trade opportunity with both Europe and the Pacific over TAA.”