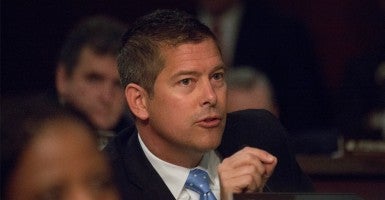 An unfulfilled request for information—pending for over 500 days —on the relationship between the Export-Import Bank and a consulting firm with ties to the Clinton administration has garnered the attention of the House Financial Services Committee’s oversight arm.

In a letter obtained by The Daily Signal, Rep. Sean Duffy, R-Wis., requested more information from Export-Import Bank Chairman Fred Hochberg on the “unacceptable” delay of a Freedom of Information Act request from the government watchdog Americans for Limited Government.

Duffy serves as the chairman of the House Financial Services Subcommittee on Oversight and Investigations.

“The FOIA request has been pending for more than 500 days, well above the bank’s average response time of 86 days for simple FOIA requests and 185 days for complex requests,” the letter, sent yesterday, stated.

The Daily Signal reported on the bank’s failure to respond to the request earlier this month.

In November 2013, Americans for Limited Government President Nathan Mehrens filed a request for information on the bank’s relationship with two consulting firms: McLarty Associates and the Albright Stonebridge Group.

McLarty Associates is run by Thomas McLarty, former chief of staff to President Bill Clinton. While the firm hasn’t lobbied Congress since 2005, it does maintain strong ties with former and current Ex-Im officials. Several of McLarty Associates also benefited from millions of dollars in loans and loan guarantees from the bank.

The Albright Stonebridge Group, meanwhile, is headed by former Secretary of State Madeleine Albright, who also served during the Clinton administration.

Albright’s daughter, Alice Albright, was chief operating officer and executive vice president at Ex-Im from 2009 to 2013. During that same time period, three of the Albright Stonebridge Group’s clients, Siemens AG, First Solar and Dow Chemical Co., benefited from more than $6.3 billion in financing from Ex-Im.

>>> Rubio Takes on Export-Import Bank: ‘Government Should Not Be Picking Winners and Losers’

Cunningham served as a team leader for Ex-Im on President Obama’s transition team and was appointed a member of the bank’s advisory committee in 2011, 2012 and 2013. During the latter two years, he was the committee’s chairman.

Browner, who is affiliated with the Albright Stonebridge Group, was a member of the Obama-Biden transition team’s advisory board and was appointed to Ex-Im’s advisory committee in 2013.

“It’s well passed the time for [Ex-Im] to deliver this stuff,” Mehrens told The Daily Signal. “There are legitimate questions on the relationships that were the subject of the FOIA request. The public needs to see this, and they need to see it now, especially as there are heated debates over the legitimacy of the bank and whether it should be reauthorized at all, and whether the relationships are just the tip of the iceberg.”

In his letter, Duffy asked Hochberg for unredacted copies of the records requested in Americans for Limited Government’s FOIA by May 11.

Ex-Im officials told Mehrens today that documents pertaining to his request had been submitted to the bank’s legal department for review and approval.

“Is this the norm there or do they just play by their own rules, or are these isolated incidents?” Mehrens asked of the potential relationships with the firms. “I think a lot of these records here will hopefully shed some light on these specific relationships.”

Ex-Im provides taxpayer-backed loans and loan guarantees to foreign countries and companies for the purchase of U.S. products. The bank’s charter expires June 30, and policymakers are currently debating whether to reauthorize the agency.

The House Financial Services Committee maintains jurisdiction over Ex-Im, and its chairman, Jeb Hensarling, is one of the bank’s most ardent opponents.