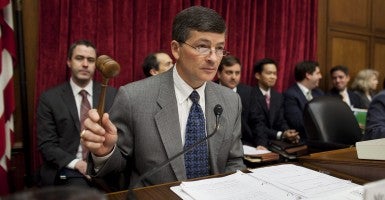 The chairman of the House Financial Service Committee scolded the leaders of Boeing and National Association of Manufacturers for their lobbying efforts to preserve the Export-Import Bank.

In a letter to Boeing chief executive James McNerney and National Association of Manufacturers chief executive Jay Timmons, Rep. Jeb Hensarling characterized the reauthorization debate as a decision between subsidy and opportunity.

“I respect your constitutional right to petition your government for the redress of grievances,” Hensarling wrote. “I just wish you had used the occasion to petition for opportunity instead of special privilege.”

>>> The Not So ‘Small’ Businesses Ex-Im Bank Boosts

A vocal opponent of the 80-year-old institution, the Texas Republican alerted industry executives that he’s eager to help by easing the burden of government regulation and taxation, but not by enabling more subsidies.

“Fundamentally, there are only two ways for public policy to increase competitiveness: opportunity or subsidy. I stand ready to help on the former not the latter,” Hensarling said.

The letter follows reports that Boeing and other Ex-Im supporters have increased their Washington lobbying efforts. The bank faces a Sept. 30 reauthorization deadline.

As chairman of the Financial Services Committee, which has jurisdiction over Ex-Im, Hensarling will oversee the bank’s future. In yesterday’s letter, Hensarling renewed his opposition.

Chartered by President Franklin Roosevelt in 1934, the bank was designed to bolster U.S. exports. Conservatives contend the bank has now become an institution of corporate welfare, while supporters maintain that Ex-Im supports American jobs and small business.

Boeing responded to Hensarling’s letter by calling the bank “vital.” A spokesman for the National Association of Manufacturers told Reuters it was “committed to manufacturers, their families and the communities they serve and protecting them by making sure the Ex-Im Bank is reauthorized.”

Hensarling ended his letter by inviting both McNerney and Timmons to “come by and see me” if they express interest in supporting Hensarling’s vision for growth.

“If you’re promoting policies for taxpayer subsidies and special privileges,” Hensarling wrote, “a meeting would probably not not prove to be a good use of your time.”

>>> Read the letter from Hensarling to McNerney and Timmons: