It’s Time to Make a Trade Deal With China 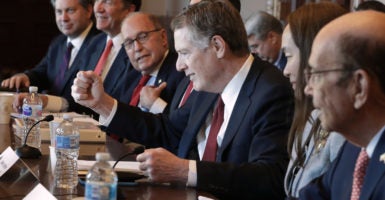 As American and Chinese delegations wrap up trade talks Thursday in Washington, the official word is that U.S. negotiators have articulated where they want China to make reforms. Unofficially, though, questions remain over how the White House perceives the future of U.S.-China economic relations, and how this might upset trade negotiations.

So where are the U.S. and China in this trade dispute, as the teams led by U.S. Trade Representative Robert Lighthizer and Chinese Vice Premier Liu He conclude their talks?

Despite almost 18 months of efforts, the White House has yet to bring fundamental change to China’s trade practices.

This should come as no surprise given the scale of the issues involved, including subsidies, treatment of state-owned enterprises, coerced technology transfer, and intellectual property rights.

Lighthizer simply can’t deliver a comprehensive deal that resolves all these issues before March 2, when the additional tariffs on $200 billion worth of goods Americans buy from China increases from 10 to 25 percent.

In fact, some doubt whether the U.S. trade representative can deliver a comprehensive and sustainable deal before 2020. China is limited in what it can give the U.S.—constrained by both domestic and international obligations.

It’s worth repeating, however, that a trade war with China isn’t sustainable over the long run, either. Now is the time to make a deal with China, even if it’s limited for the time being.

American exporters may never fully regain market share in China. But American manufacturers would at least see less uncertainty and boost investment in China and at home. American importers would get to stop paying billions in taxes to the Treasury Department.

If, over the next 30 days, Lighthizer can achieve a “light” trade deal with China, the real winners will be those Americans who are still being hurt by the trade war. Meanwhile, he can get a down payment on some policy changes and put in place mechanisms for monitoring and enforcing future commitments.

A Possible Deal Within 30 Days

There’s no certainty that Washington and Beijing will come to an agreement by the end of February. But given the slowing Chinese economy and soon-to-slow U.S. economy, there’s more pressure now to make a deal.

Beijing commits to greater protection of American intellectual property from theft and illegal transfer. There is uncertainty over how both the U.S. and China could police and enforce these efforts, especially when it comes to cyber-enabled theft. This will need to be worked out. Beijing already is taking steps to reform its tech transfer laws.

Beijing agrees to fair disciplines on subsidies to its state-owned enterprises. Nearly 40 million people are employed by state-owned enterprises in China, known as SOEs, which are roughly valued at $27 trillion. The Chinese Communist Party won’t tinker with them without a fight—however good it may be for China’s economy.

Both sides commit to frequent and regular dialogues. A deal by March doesn’t mean that’s the end of U.S.-China trade negotiations. Continued meetings will be important to make sure previous agreements are implemented and new reforms are forthcoming.

These are just a few options that might fulfill the list of 142 demands the U.S. side has for Beijing.

What’s missing from the list is a reduction in China’s nonretaliatory tariffs. Despite the meetings being called trade talks, this isn’t your typical trade deal.

China’s international trade agreements prohibit it from giving U.S. exports preferential treatment. China can lower tariffs to the rates committed to in the World Trade Organization, as it did earlier last year on auto imports. But besides this, American exporters shouldn’t expect to gain an edge against their European, Latin American, and Asian competition in China.

Going forward, the sticking points will remain intellectual property theft, what sort of enforcement mechanism both sides can agree upon, and how to make sure China is compliant.

The White House has shown it is willing to go to bat over this type of unlawful activity in China. However, it’s unrealistic to expect the intellectual property issue to be solved anytime soon.

Those who understand this yet support continued tariffs don’t understand that revenge against intellectual property theft is neither an appropriate nor effective U.S. policy.

The Justice Department’s efforts to indict Chinese companies charged with corporate espionage is one good effort. But the U.S. could be doing more to sanction those companies and individuals found guilty of intellectual property theft.

There’s little reason American businesses and consumers should continue to bear the cost of the trade war when there are other, more effective policies out there. Reaching a limited deal with China before March 2 would be a good start.