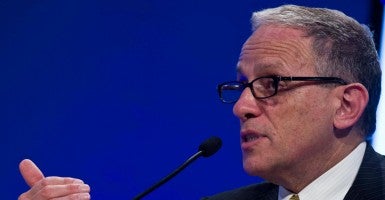 As lawmakers grapple with whether to reauthorize the Export-Import Bank, an Australian satellite company with a “significantly uncertain” future that received more than $300 million in loans from the bank is in jeopardy of defaulting on its loans.

NewSat, an Australian satellite communications company, has benefited from more than $304 million in loans from the Export-Import Bank. The loans, disbursed in 2012, 2013 and 2014, according to the bank’s records, were awarded for the company to purchase products from defense giant Lockheed Martin. Lockheed Martin is building NewSat’s Jabiru-1, which is billed as Australia’s first non-government, non-foreign owned satellite.

According to the Export-Import Bank’s records, the bank’s board of directors unanimously approved financing for NewSat in both 2012 and 2013.

“It is fantastic to receive the support of the U.S. Ex-Im Bank,” NewSat Chief Executive Officer Adrian Ballintine said at the time. “They are backing our Jabiru-1 satellite with a direct loan, with a favorable low-fixed interest rate and long tenure. The deal is an Australian first for Ex-Im Bank and a major milestone towards the launch of Australia’s first commercial satellite.”

The project was also heralded by Hochberg at a February 2014 event with the Washington Space Business Roundtable, which was attended by former NewSat Chief Operating Officer Michael Hewins.

NewSat’s Jabiru-1 satellite was supposed to be completed by 2014, but the company announced it was delaying its launch date until mid-2016.

Now, the company is in “technical default” with Lockheed Martin after it failed to make payments totaling $21 million. The defense contractor also issued a notice to terminate its contract with NewSat.

The Australian company notified its shareholders of the overdue payments on Jan. 27.

“NewSat, Lockheed Martin and the lenders are meeting regularly with a view to remedy the default, agree the terms on which debt funding could recommence and resolve all outstanding issues,” NewSat’s notice to shareholders said.

According to reports, the company must renegotiate the hundreds of millions of dollars it received in loans or face liquidation.

Multiple requests The Daily Signal made to Ex-Im regarding the status of NewSat’s loans went unanswered.

Though the company’s financial issues have only recently come to light, public reports show NewSat had a history of conflicts of interest and lucrative spending that coincided with Ex-Im’s awarding of loans.

Ex-Im provides taxpayer-backed loans and loan guarantees to foreign countries and companies for the purchase of U.S. products. The agency’s authorization expires June 30, and it has become a highly contested issue with lawmakers in Washington, D.C., as they begin to debate its future.

“By most accounts, NewSat is a company with severe structural problems that could lead to Solyndra-type losses for American taxpayers,” Dan Holler, spokesman for Heritage Action for America, told The Daily Signal. “It is hardly a surprise private investment was forthcoming.  This also makes it harder for Ex-Im to justify its small business pitch to Congress.”

“By most accounts, NewSat is a company with severe structural problems that could lead to Solyndra-type losses for American taxpayers,” said @DanHoller of @Heritage_Action.

A ‘Damning’ Critique of NewSat

According to the Sydney Morning Herald, Brendan Rudd, a former vice president for the Australian company BHP Billiton, was tasked with reviewing NewSat’s operations.

What Rudd found, according to his report on the company, did not bode well for NewSat.

According to Rudd’s review, the satellite company spent more than $10,000 on several dinners and showed a “complete lack of control” on overseas travel.

In an email to The Daily Signal, Ballintine said NewSat “generally denies the allegations” in Rudd’s memo.

Reports filed by NewSat from 2012 to 2014 show the company spent more than $1.2 million on travel alone over the three-year span.

The disclosures were made public in a September 2014 report from NewSat under the heading “Correction of Errors.” The company listed two payments to Cresta Motor Yachts in June 2011 and June 2012. According to the report, the yacht company was retained for “the purposes of executive marketing and business development” associated with the Jabiru satellite project.

“I have never seen nor heard of more appalling corporate behavior than at NewSat,” Rudd wrote in a memo to NewSat’s independent directors, according to the Sydney Morning Herald.

In a statement to the Australian Securities Exchange, NewSat officials dismissed Rudd’s findings and said the company was working to strengthen its practices.

“In addition and prior to learning of the views of Mr. Rudd, the NewSat Board of Directors had already decided to strengthen the company’s corporate governance policies and practices,” NewSat said.

Rudd’s review was given to officials at the Export-Import Bank, who went on to interview former and current officials at NewSat. Last year, executives with the company flew to Washington, D.C., where the bank is headquartered, to meet with Ex-Im representatives.

Repeated requests for information on NewSat’s meeting with the bank went unanswered by Ex-Im.

In addition to the findings of Rudd’s memo, NewSat also encountered legal issues with a Virginia-based satellite communications company, TrustComm.

In response to the lawsuit, NewSat officials issued a statement on March 2 with the Australian Securities Exchange refuting the charges.

“NewSat considers that the TrustComm claim is baseless and without foundation,” the company said. “NewSat has demanded that TrustComm withdraw its claim, and the parties are now in the process of agreeing the terms on which the US suit against Newsat will be dismissed.”

The case was withdrawn days later and the two companies are currently in mediation.

“It detracts from our confidence in their ability to see this through,” he said. “The market has substantially changed. There’s much more supply now than there was [years ago]. There’s much more competition, and that calls into question just how [NewSat’s] capability plays out into the overall field.”

Though TrustComm’s lawsuit against NewSat was eventually dropped, the company’s external auditor, Robert Dalton with Ernst and Young, expressed concerns about the company’s ability to continue without threat of liquidation.

Dalton classified the defaulted loans as “current liabilities” and said that NewSat’s ability to continue as a “going concern,” or without the threat of bankruptcy, was in jeopardy.

In NewSat’s most recent report on its financial statements—released Feb. 27—the company announced more than $185 million from export credit agencies were considered in default.

In the February report, Dalton expressed concern about the ability of NewSat to continue without the threat of bankruptcy.

“[T]here is significant uncertainty as to whether the group will continue as a going concern as the group is dependent on the satisfaction of waiver conditions and the ongoing support of Export Credit Agencies lenders,” he stated.

In his email to The Daily Signal, Ballintine stressed that NewSat “appreciates the support” it’s received from its lenders, including Ex-Im.

The Future of the Export-Import Bank

The Export-Import Bank’s authorization expires June 30, and lawmakers on Capitol Hill have been debating whether it’s charter should be extended or not.

Conservatives, led by House Financial Services Chairman Jeb Hensarling of Texas, believe the bank is an engine of corporate welfare and cronyism. Additionally, opponents believe a handful of politically connected companies such as Lockheed Martin benefit the most from Ex-Im financing.

Supporters, including President Obama, argue the bank creates jobs in the U.S. and helps small businesses compete in the global market.

Though Ex-Im’s charter doesn’t expire until June 30, a bipartisan group of senators introduced a bill reauthorizing the bank until 2019 last week. The legislation would focus on increasing lending to more small businesses and boosting accountability and oversight.