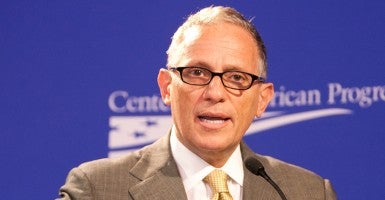 Debate over the future of the Export-Import Bank is beginning to ramp up on Capitol Hill again. Today, the House Financial Services Committee rejected an amendment that would have forced the panel to formally consider reauthorization of the bank.

Three Democrats on the committee—ranking member Maxine Waters of California and Reps. Gwen Moore of Wisconsin and Denny Heck of Washington—introduced the amendment. It failed 22 to 32.

The Financial Services Committee was meeting to mark up President Obama’s 2016 budget request and issue guidance to the House Budget Committee on issues within the panel’s purview.

The amendment called on the committee “to consider reauthorization of the bank through regular order that lets all sides be heard.”

The bank’s existence has been highly contested in recent months. Conservatives, led by Financial Services Chairman Jeb Hensarling of Texas, argue the bank serves as an engine of corporate welfare and furthers cronyism. Meanwhile, Democrats and moderate Republicans say it creates jobs in the United States and helps small businesses compete in the global market.

The bank received a short-term reauthorization in September, and its charter expires June 30.

Hensarling hasn’t yet said whether he will move a bill to reauthorize Ex-Im through the Financial Services Committee. If he chooses not to, House leadership could bypass him and bring legislation to the floor.

Rep. Stephen Fincher, R-Tenn., introduced legislation last month that would reauthorize the bank for five years. Fifty-eight lawmakers signed on to the bill as co-sponsors.