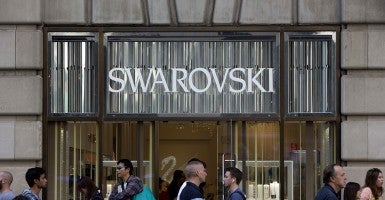 Ex-Im has been miscounting the number of small businesses that get assistance. Austria’s Swarovski jewelers was one of the companies categorized as small businesses. (Photo: Andrew Kelly/Newscom)

Officials of the Export-Import Bank continuously justify apportioning billions of dollars in taxpayer subsidies as necessary to the very survival of America’s small businesses. But an investigation by the Reuters news agency has found that potentially hundreds of the subsidy recipients categorized as “small businesses” by Ex-Im are actually very large enterprises or units of multinational conglomerates.

This finding adds to the myriad examples of bank mismanagement and dysfunction that have been documented for years by Ex-Im’s inspector general and the Government Accountability Office.

Whether testifying before Congress, in speeches to trade groups or during media interviews, bank President Fred Hochberg boasts that small businesses are “the core” of Ex-Im’s mission. (The bank provides subsidized financing to foreign firms for the purchase of U.S. exports.) That claim is also central to Hochberg’s lobbying of Congress for bank reauthorization.

Analyses by both the Heritage Foundation as well as the Mercatus Center have instead documented that small businesses actually receive less than 20 percent of the Ex-Im subsidies each year (in dollars). In fact, the biggest beneficiaries are multinational corporations that could easily access private financing, including Boeing ($91 billion market capitalization), General Electric ($267 billion), Bechtel (2013 revenues: $39.4 billion), and Caterpillar (2013 sales and revenues: $55 billion).

And now it turns out that the bank has been miscounting the number of small businesses that do get assistance. “Companies owned by billionaires like Warren Buffet and Mexico’s Carlos Slim, as well by Japanese and European conglomerates, were listed as small businesses,” Reuters reported. So, too, were Austria’s Swarovski jewelers, North Carolina’s Global Nuclear Fuels (owned by General Electric) and Japan’s Toshiba and Hitachi. The bank’s list of small businesses in Texas includes engineering giant Bechtel, which has 53,000 employees.

The extent of small business assistance is also inflated by the bank’s expansive definition of “small,” which includes firms with as many as 1,500 workers, as well as companies with revenues of up to $21.5 million annually.

The bank charter was set to expire on Sept. 30, and proponents sought a five-year reauthorization and $20 billion hike in annual financing authority (to $160 billion). However, criticism of the bank, corroborated by government reports of mismanagement, dysfunction and risk, prompted Congress to approve only a nine-month extension.

The Reuters discovery should greatly inform the looming debate on a long-term reauthorization. Bank officials’ boasts about the degree of small business benefits are not only exaggerated, but suspect.

The fact is, there is no shortage of private investment for export financing: 98 percent of the $2.2 trillion in annual U.S. exports are financed without help from Ex–Im. The bank is little more than a conduit for corporate welfare and should be eliminated.