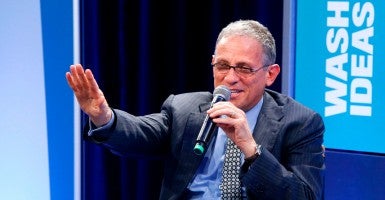 This week, the Obama administration praised the opening of a solar farm in California, which was constructed with the backing of a $1.5 billion loan guarantee from the Department of Energy.

But the project’s critics argue it “reeks of cronyism,” and they’re finding themselves in lockstep with opponents of the controversial Export-Import Bank, as the solar farm’s owners are also some of the bank’s biggest beneficiaries.

Earlier this week, The Daily Signal reported on the inauguration of the Desert Sunlight solar farm, which was built with the backing of a taxpayer-funded loan guarantee from the Department of Energy. Three firms—General Electric, NextEra Energy and Sumitomo Corporation—own the solar farm located in California’s Mojave Desert. First Solar, Inc., a Tempe, Ariz.-based firm, developed it.

At the farm’s inauguration, Secretary of the Interior Sally Jewell praised the project for helping to “move our nation toward a renewable energy future.”

However, opponents criticized the farm’s construction for serving as an engine of cronyism.

“If the Desert Sunlight solar firm is the ‘beginnings of a renewable energy future,’ then the future doesn’t look bright for taxpayers, ratepayers and all Americans who think mega-corporations should make a living by selling their products, not by selling a bill of goods,” The Heritage Foundation’s Mitchell Tu and David Kreutzer wrote for The Daily Signal.

In addition to benefiting from the Department of Energy’s now-defunct 1705 loan program, two of the four firms involved also are significant beneficiaries of funding provided by the Export-Import Bank: General Electric and First Solar.

The Export-Import Bank provides taxpayer-backed loans and loan guarantees to foreign countries and companies for the purchase of U.S. goods. The bank’s charter is set to expire June 30, and lawmakers on Capitol Hill are beginning to wade into the debate over whether its life should be extended.

However, its critics, including House Financial Services Committee Chair Jeb Hensarling and liberal Rep. Alan Grayson of Florida, believe it helps a handful of big businesses. Similar to the Desert Sunlight solar farm, bank opponents also argue it serves as an engine of cronyism and corporate welfare.

According to public data, General Electric has benefited from more than $1.3 billion in taxpayer-backed loans and loan guarantees provided by Ex-Im since 2007. The company is often regarded as one of the biggest beneficiaries of Ex-Im funding, alongside Caterpillar and Boeing.

Similarly, First Solar has benefited from hundreds of millions of dollars in loans from the bank.

In 2011, bank officials authorized $573 million to support the company’s projects in India and Canada. Then, in 2012, Ex-Im provided two loans totaling $57.3 million to finance the export of solar panels to India. First Solar manufactured the panels.

“If a company cannot secure financing from the private sector, it should reevaluate its business model. If a company is reliant upon multiple handouts, that is simply unsustainable and reeks of cronyism,” said @DanHoller of Heritage Action for America.

Additionally, First Solar is expected to be one of the green-energy firms that receives loans and loan guarantees through Ex-Im’s $1 billion partnership with India. President Obama announced that the bank would finance the exports during a visit to India last month.

“If a company cannot secure financing from the private sector, it should reevaluate its business model. If a company is reliant upon multiple handouts, that is simply unsustainable and reeks of cronyism,” Dan Holler, spokesman for Heritage Action for America, told The Daily Signal. “It is the type of corporate welfare that no politician can justify.”

Heritage Action, the sister organization of The Heritage Foundation, is one of Ex-Im’s more outspoken opponents.