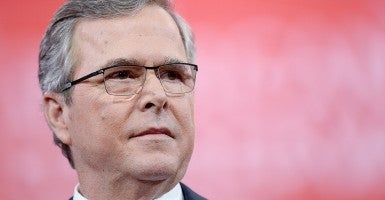 Republican presidential hopeful Jeb Bush’s declared support for phasing out the Export-Import Bank could give him an opening with conservatives who have grown skeptical of what they consider his more establishment cast in recent years.

Bush, laying out his conservative record as a two-term governor of Florida, told a group of wealthy, pro-free-market donors that the Export-Import Bank was on his list of federal government intrusions in the marketplace that “should be phased out.”

“Ex-Im is a smaller one,” Bush said of the federal bank, compared with other targets for phase-out such as taxpayer-backed mortgage giants Fannie Mae and Freddie Mac.

Bush made the remarks during his appearance Thursday night before the Club for Growth in Palm Beach, Fla., which during its winter conference also heard from other potential GOP candidates for president such as Wisconsin Gov. Scott Walker, Sen. Marco Rubio of Florida and Sen. Ted Cruz of Texas.

Heritage Action for America, part of a coalition along with the Club for Growth and other free market and taxpayer groups that advocate pulling the bank’s plug, welcomed Bush’s remarks.

The Export-Import Bank is becoming a threshold question for any Republican primary voter, but beyond that, it is a way for the eventual nominee to distance the party from corporate welfare and cronyism. It is very encouraging to see Bush, and many of the other potential 2016 candidates, rejecting this blatant slush fund for corporate welfare.

A spokeswoman for Bush has not responded to an email from The Daily Signal.

Ex-Im is an 81-year-old federal agency that provides taxpayer-backed loans and loan guarantees to foreign countries and companies for the purchase of U.S. products.

As reported in detail by The Daily Signal, conservatives in Congress last year came close to shuttering the bank at the end of September, when the most recent charter was to expire. Lawmakers, however, ended up extending its life through June.

Opponents on both sides of the aisle argue the agency is a dispenser of corporate welfare and center of cronyism that for the most part benefits a small number of politically connected corporations.

Supporters contend that Ex-Im creates or preserves U.S. jobs and helps small businesses compete in the global market. In recent days, business leaders organized by the U.S. Chamber of Commerce and National Association of Manufacturers, have renewed their appeals to lawmakers to save the bank.