We’re Not Losing to China in a Trade War: 5 Misconceptions About US Trade With China 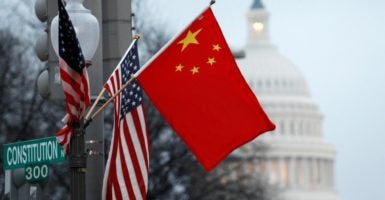 A new report by the U.S.-China Business Council found that American goods exports to China have increased by 86 percent since 2008. (Photo: Hyungwon Kang/Reuters/Newscom)

As U.S. officials prepare to negotiate trade deals with China, it’s crucial to recognize some of the most damaging misconceptions about trade between our two nations that have spread as tensions have risen.

Here are five important things to know about U.S. trade with China:

1. U.S. exports of goods to China have been increasing. By focusing on the trade deficit, U.S. rhetoric insinuates that American companies are losing access to the Chinese market. But this is not true.

In fact, a new report by the U.S.-China Business Council found that American goods exports to China have increased by 86 percent since 2008. A dip in exports occurred in 2015 and 2016, but in 2017, U.S. exports to China reached their highest value in 10 years.

This is natural for any developed economy like the U.S. that is increasingly a service-led economy. Services make up roughly 69 percent of U.S. gross domestic product (79 percent if you exclude government expenditures from GDP), compared to just 52 percent in China.

3. Beijing has reduced tariffs on imports. While additional steps are still needed to open up markets, in December, China released a long list of dramatic tariff cuts on a range of imported consumer goods. Over 200 products saw an average tariffs reduction of 10 percent. While China’s average applied tariff rate is just 5 percent, more work is needed in the area of non-tariff barriers such as regulatory requirements.

4. Beijing wants a stable currency. How much your dollar can buy is an important factor for trade. A weak currency usually means others will buy more of your stuff, while a strong currency means you can buy more of other people’s stuff.

Beijing would prefer a currency that’s more or less stable in the international financial system. A measure of China’s real effective exchange rate implies that its currency is in fact overvalued by roughly 20 percent. At the same time, the U.S. dollar is also overvalued by roughly 10 percent. This means that goods exported from both the U.S. and China are in fact more expensive in the global trading system. But American consumers are also able to buy more imports with their stronger U.S. dollar.

5. The trade deficit is not a measure of loss of wealth. The trade deficit is an accounting measure that simply looks at the flow of goods and services between two countries—without including flows of investment and capital. It doesn’t measure how wealthy American’s actually are. Just like consumers can’t go out and spend their worth in GDP per capita (roughly $58,000), the trade deficit per capita can’t be taken out of your bank account. Household wealth, or simply the availability of goods like smartphones and other household goods, are measures that show an improvement in Americans’ lives regardless of the trade deficit.

America’s delegation to China must enter negotiations with real objectives for reducing barriers to trade and investment, and leave the rhetoric at home. Americans workers, businesses, and families will be best served by efforts that allow them to buy and sell freely with China.