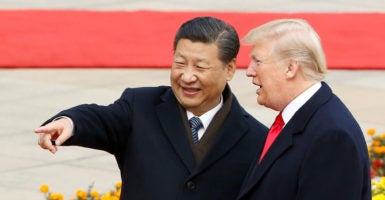 Following President Donald Trump’s recent trip to Asia, China has released a long list of dramatic tariff cuts on a range of imported consumer goods. In fact, over 200 different products will see an average reduction of approximately 10 percent.

U.S. cheese exporters have been particularly vocal about the importance of China lowering tariffs. Demand for dairy products has been growing rapidly in China—by 100,000 metric units over the past decade—and the U.S. dairy industry could benefit from greater access to the Chinese market.

Tom Vilsack, president and chief executive of the U.S. Dairy Export Council, also highlighted the diplomatic benefits of the cuts, noting that the process will “cultivate trust and build critical relationships between the U.S. dairy industry and Chinese official institutions.”

Beyond the U.S. dairy industry, many multinational corporations with household names in America will see major financial gains.

Nestle could see an approximate sales increase of 15 percent, or $18.7 billion, as a result of the tariff cuts. Procter & Gamble Co., an American company that manufactures products for brands like Tide and Gillette, will see tariff reductions on items ranging from diapers to electronic toothbrushes.

China’s unilateral decision to cut tariffs, however modest, should prove beneficial for its major trading partners, including the United States. The cuts will also benefit the people of China, allowing them greater access to a variety of products at more competitive costs.

The Index of Economic Freedom, published annually by The Heritage Foundation, examines 12 factors of economic freedom, including trade freedom. While China’s average applied tariff rate is just 3.2 percent, import tariffs vary drastically from product to product across the Chinese economy, and often result in costly barriers for foreign companies.

Hopefully, China’s tariff reductions will be just a first step in a series of efforts to allow goods, services, and capital to flow more freely between the rest of the world and China.

To have a major impact, however, those efforts will need to include greater privatization of the state-owned enterprises that distort China’s economy, as well as significant reductions in government control of the finance and banking sectors.