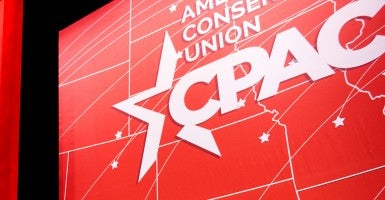 The Daily Signal made its CPAC debut this year, closely following the 2016 contenders and hot policy debates at America’s largest conservative conference. We’ve pulled together a quick take on the highlights of the first two days.

1) Scott Walker Casts Himself as Champion of ‘Hard-Working Taxpayers’

The Wisconsin governor arrived at CPAC as the early 2016 frontrunner in Iowa, home to the much-anticipated Republican caucus next year. His speech, which came at the end of day one, drove home an economic message, touching on issues such as taxes and jobs that have played a big role in his three electoral victories in the Badger State.

During his speech, Walker found himself heckled by a member of the audience—an experience he’s endured on more than one occasion in Wisconsin. Winning applause from the crowd, he declared, “those voices can’t drown out the voices of hard-working taxpayers.” With a deadline fast approaching to fund the Department of Homeland Security, Sen. Ted Cruz, R-Texas, showed no signs of compromising with Democrats. Conservatives, including Cruz, want to undo President Obama’s executive actions on immigration as part of the funding bill, which the Senate will vote on again Friday.

Before his speech, The Daily Signal joined a handful of journalists for a sit-down interview with Cruz. Here’s what he told us about the state of play:

3) Ben Carson Tells CPAC Crowd He Wants to ‘Get Rid of Dependency,’ Not Welfare Programs

CPAC’s first act Thursday was the Maryland neurosurgeon who had a pack of devoted followers track his every move around the Gaylord National Convention Center. In his speech, Carson touched on a number of hot-button issues—from government dependency to reaching minority voters.

Carson argued for greater local control in education, noting that homeschooling is the best choice for parents and public school is the worst. He also publicly stated his opposition to Common Core. Just outside the main ballroom at CPAC sits The Daily Signal’s studio. Rep. Mia Love, R-Utah, elected in November, joined us to share her goals in Congress and why she’s a champion of conservative principles.

“My goal is to do more undoing than doing—removing the layers of bureaucracy,” Love said.

5) Hillary Clinton’s Foundation Accepted Donations From Foreign Governments. One GOP Leader Says That Disqualifies Her From Being President.

At a private briefing with reporters, Republican National Committee Chairman Reince Priebus took aim at Hillary Clinton, the Democratic frontrunner for president. Citing donations given to the Clinton Foundation by foreign governments, Priebus said the former secretary of state should be disqualified from her White House bid.

“I don’t know how Hillary Clinton is going to take a 3 a.m. call from a leader in Yemen or Algeria or Saudi Arabia when she was willing to have her foundation take potentially millions of dollars from those governments,” Priebus said. The speaker toughest on Hillary Clinton yesterday was Carly Fiorina, the former Hewlett-Packard chief executive and prospective 2016 candidate. Fiorina directed her attack on Clinton’s record as secretary of state, namely her role in the 2012 terror attacks in Benghazi, Libya, and the “Russian reset.” 7) Sheriff David Clarke: Ferguson Is Not an Epidemic

Milwaukee County Sheriff David Clarke made headlines for his views on race in America after Michael Brown’s death in Ferguson last year. As riots destroyed the city, Clarke garnered national attention for taking an unconventional view: Ferguson doesn’t represent an epidemic of black men being killed by police.

“We operate in a world where not everything goes right,” Clarke told The Daily Signal. “And I think that’s what we saw in Ferguson.”

8) How Twitter Reacted to Conservative Presidential Pitches at CPAC

With an estimated 10,000 grassroots activists in attendance and hundreds of journalists roaming the halls of CPAC, there’s no shortage of activity on social media. We collected some of the instant reaction on Twitter in words and pictures. Be sure to follow @DailySignal for more.

9) Chris Christie, ‘Not Worried,’ Draws Laughs and Cheers at CPAC

New Jersey Gov. Chris Christie brought his straight-talking style to the CPAC stage, downplaying concerns about his recent troubles and casting himself as a man of conviction.

“It’s all, in the end, about standing up for what you believe in,” said Christie, who touted his work to improve the lives of middle-class voters. Longtime conservative activist and Eagle Forum founder Phyllis Schlafly was honored in Washington, D.C., Wednesday night on the 50th anniversary of her book, “A Choice, Not an Echo.”

She dropped by The Daily Signal’s studio Thursday to offer a warning to conservatives about the so-called “kingmakers” who she fears will negatively influence the selection of a Republican presidential candidate.

While many speakers focused on domestic policy, Louisiana Gov. Bobby Jindal directed his remarks to the fight against terrorism. In a speech sharply criticizing President Obama, Jindal faulted the administration for failing to properly combat ISIS. Earlier this week, Rep. Jeff Duncan, R-S.C., led an effort to thank House Republican leaders for standing firm in their opposition to President Obama’s executive actions on immigration. In a visit to The Daily Signal’s studio Thursday, he reiterated his criticism of a Homeland Security funding bill that lacks language undoing the president’s policy.

“Harry Reid and his Democrats are absolutely responsible for any DHS shutdown,” Duncan told The Daily Signal. “They’ve stopped the ability of a bill to come to the Senate floor.”

UPDATE: Based on your feedback, we’ve added 13 more takeaways from Friday’s activities in addition to the original 12.

Arguably the day’s most anticipated speaker, Jeb Bush tackled 20 minutes of questions from Fox News’ Sean Hannity. The former Florida governor was booed and heckled but also had a large cheering section that repeatedly broke out in applause, particularly when he talked about immigraiton.

Bush covered a lot of ground with Hannity and we’ve pulled out the top 15 highlights to help you digest it all. They include his top policy priorities as well as his reaction to mother Barbara Bush’s quip that America didn’t need another Bush president. Bush spent nearly 10 minutes explaining his stance on immigration and Common Core, two issues Hannity identified as the most contentious among conservative activist. The Daily Signal was there to capture it—unfiltered—for you to see for yourself what he said.

Not everyone at CPAC wanted to hear from Bush. Shortly after he took the stage, a group led by a man dressed in Revolutionary War clothing exited the main ballroom and staged a boycott. CPAC had to adjust its schedule to accommodate congressional lawmakers who were struggling to avoid a Department of Homeland Security shutdown. One of them was Sen. Rand Paul, winning the past two CPAC straw polls. (Results expected after 5 p.m. Saturday.)

The Kentucky Republican had a loyal following for his CPAC speech Friday. He used the opportunity to appeal to the youthful crowd, telling them that “We have to defend the whole Bill of Rights.” One of Paul’s critics, John Bolton, visited The Daily Signal’s studio to explain why he hopes the Kentucky Republican “gets redemption and hope he understands, at some point, the importance of a strong foreign policy.”

Bolton, who took issue with news headlines suggesting his support for Paul, said he’s still weighing whether to seek the presidency in 2016

In his CPAC speech, Donald Trump sounded serious about a run in 2016. “I want to do it so badly,” he said. “People think I’m doing this for fun. I’m not doing it for fun.”

As he made his way through the convention center—surrounded by one of the biggest entourages at CPAC—The Daily Signal scored a short interview with the business mogul and reality TV star.

He’s no longer leading the nation’s second-biggest state but Rick Perry still boasts a loyal following. The former Texas governor is exploring another presidential bid and came to CPAC with a tough message for President Obama on issues such as ISIS and immigration.

Perry also dropped by The Daily Signal’s studio for an interview. He told us the president’s greatest indictment is an unwillingness to engage in the constitutional process—something he’d have no trouble doing if elected to the White House.

Former Hewlett-Packard chief executive Carly Fiorina attacked Hillary Clinton during her CPAC speech Thursday, then continued the critique during an interview with The Daily Signal Friday.

Florida Sen. Marco Rubio has one word to describe Hillary Clinton: “Yesterday.” As he contemplates a possible 2016 campaign, Rubio stuck closely to the theme of his recently published book, “American Dreams.”

Recalling his own journey as “the son of a bartender and a maid,” the first-term Republican senator said, “Sometimes you wouldn’t know we’re an exceptional nation by listening to the left.” As the co-host of MSNBC’s “Morning Joe,” Joe Scarborough is often surrounded by people to his left. That didn’t deter the former Florida congressman from drawing a distinction on the type of candidate Republicans need to nominate in 2016. He dropped by The Daily Signal’s studio to share his view.

23) How Newt Gingrich Would Win Black and Hispanic Votes

Former House Speaker Newt Gingrich is never shy about giving advice. In remarks to The Daily Signal that Gingrich admitted would probably get him in trouble, he outlined the approach 2016 candidates should take to convince black and Hispanic voters they can successfully govern. It starts, he said, by going to their communities and listening.

24) What Are the ‘Consequences’ of Disobeying Obama’s Immigration Actions? This Senator Seeks Answers

President Obama said at a Miami town-hall meeting this week there would be “consequences” for government officials who fail to carry out his immigration executive actions. Now, a U.S. senator is demanding answers in light of a recent federal court ruling against Obama’s policy.

Sen. James Lankford, R-Okla., told The Daily Signal he wants to know what “specific consequences” the Obama administration would take if an Immigration and Customs Enforcement agent failed to obey Obama’s unilateral action.

Want it all broken down in 140 characters or less? We’ve pulled together some of the best reactions on Twitter to this year’s CPAC speeches. If you’re on Twitter, use the hashtag #CPAC2015 to engage in the conversation.

CPAC runs through Saturday at the Gaylord National Convention Center, just outside of Washington, D.C. The Daily Signal will be closely following the event. For real-time updates, follow @DailySignal on Twitter and like our Facebook page.