Hillary Clinton’s Foundation Accepted Donations From Foreign Governments. One GOP Leader Says That Disqualifies Her From Being President. 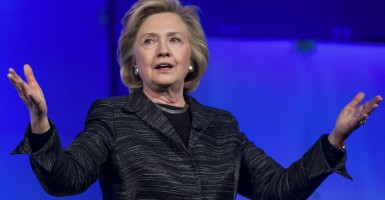 During a private briefing with reporters at the 2015 Conservative Political Action Conference, or CPAC, outside of Washington, D.C., Priebus said Clinton should be disqualified from running for president because the Clinton Foundation received donations from foreign governments.

“I don’t know how she does her job as president,” Priebus said. “How is it possible that the frontrunner of the Democratic Party is going to be president of the United States when she’s taking money while she’s representing the United States as secretary of state?” Over the past few weeks, the Clinton Foundation’s donor lists have come under scrutiny after the group defended its decision to lift a ban on donations from foreign governments. The Clinton Foundation put the moratorium in place during Clinton’s time as secretary of state. Foreign governments including Saudi Arabia, Oman and the United Arab Emirates are among those who have given money to the group.

Additionally, The Washington Post recently revealed that the Clinton Foundation accepted donations from seven foreign governments during Clinton’s time as secretary of state.

>>> Ben Carson Tells CPAC Crowd He Wants to ‘Get Rid of Dependency,’ Not Welfare Programs

In discussing the donations, Priebus cited an advertisement that ran during Clinton’s 2008 presidential bid.

The ad, dubbed “3 a.m.”, shows a White House phone ringing early in the morning and questions who the American people want answering it.

“I don’t know how Hillary Clinton is going to take a 3 a.m. call from a leader in Yemen or Algeria or Saudi Arabia when she was willing to have her foundation take potentially millions of dollars from those governments,” Priebus said.

Priebus said securing and accepting donations does not occur on a whim, but rather requires preparation and solicitation from those who work for an organization like the Clinton Foundation.

“People just don’t— as I know from raising money at the RNC—wake up in the morning and say, ‘I’m going to write a check for $25,000,” the RNC chairman said. “Somebody solicited the donation. Somebody made the donation happen. Somebody collected the check or gave wire transfer information to these other countries. Somebody had to make all of this happen.”

Clinton has been deemed an early frontrunner for the Democratic Party in the 2016 presidential election. Though she hasn’t officially declared her candidacy, many believe she will make a run for the White House.