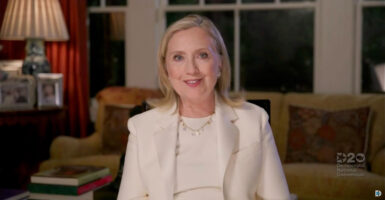 For four years, Hillary Clinton, pictured at the 2020 Democratic National Convention, has called the 2016 election "stolen" while frequently describing Donald Trump's election as "illegitimate," only the result of Russian interference. (Photo: DNCC/Getty Images)

Twitter explained why it decided to permanently ban President Donald Trump: “After close review of recent Tweets from the @realDonaldTrump account and the context around them—specifically how they are being received and interpreted on and off Twitter—we have permanently suspended the account due to the risk of further incitement of violence.”

Trump gave a long, raucous speech, in which he claimed election fraud, in front of supporters an hour before a mob stormed the Capitol building on Jan. 6. This horrific siege took place during a joint session of Congress. After the violent disruption, former Vice President Joe Biden was officially certified the winner.

Trump said: “I know that everyone here will soon be marching over to the Capitol building to peacefully and patriotically make your voices heard. Today, we will see whether Republicans stand strong for integrity of our elections, but whether or not they stand strong for our country, our country.”

Democrats’ intend to impeach Trump again because of his pre-Capitol building siege speech.

George Washington University Law School professor Jonathan Turley, a Democrat, wrote: “Like others, I condemned those remarks as he gave them, calling them reckless and wrong. I also opposed the challenges to electoral votes in Congress. But his address does not meet the definition for incitement under the criminal code. It would be viewed as protected speech by the Supreme Court.”

Similarly, Democrat and professor Alan Dershowitz wrote: “Nothing the president said constituted unprotected ‘incitement,’ as narrowly defined by the Supreme Court over nearly a century of decisions. His volatile words plainly fell on the side of political ‘advocacy,’ which is protected speech.”

How far does Twitter intend to take its policy designed to discourage “risk of further incitement of violence”?

For four years, Hillary Clinton, the failed 2016 presidential candidate, has called the 2016 election “stolen” while frequently describing Trump’s election as “illegitimate,” only the result of Russian interference.

“I believe he understands that the many varying tactics they used,” said Clinton in 2019, “from voter suppression and voter purging to hacking to the false stories—he knows that—there were just a bunch of different reasons why the election turned out like it did.”

Indeed, according to an August 2018 Gallup poll: “Democrats widely believe Russians interfered in the 2016 campaign and that it changed the outcome of the election (78% say this), presumably by helping Trump defeat Hillary Clinton.”

Never mind that Jeh Johnson, Barack Obama’s former secretary of homeland security, said in his June 2017 testimony before a congressional committee: “To my current knowledge, the Russian government did not through any cyber intrusion alter ballots, ballot counts, or reporting of election results.”

Yet, Clinton faces no ban from Twitter, despite promoting a dangerous, divisive 2016 election narrative not supported by the intelligence community.

True, the bipartisan Robb-Silberman commission found the intel leading up to the Iraq War “dead wrong.” But co-chair Laurence Silberman said: “It is one thing to assert, then or now, that the Iraq War was ill-advised. It is quite another to make the horrendous charge that President Bush lied to or deceived the American people about the threat from Saddam.” Fournier remains active on Twitter.

For four years, Clinton and Carter referred to Trump as illegitimately elected. Risk of violence, Twitter?

Reid likely altered the outcome of the 2012 election with his Senate lie about Romney and his taxes. Risk of violence, Twitter?

And “reporters” like Fournier insisted that Bush sent men and women to face death and injury over a “lie.” Risk of violence, Twitter?