Ben Carson Tells CPAC Crowd He Wants to ‘Get Rid of Dependency,’ Not Welfare Programs 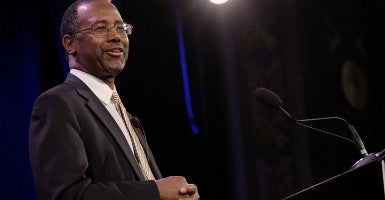 Ben Carson, the celebrated neurosurgeon who has excited many grassroots conservatives, said today that if he were president he would not be an enemy of welfare programs but of “dependency” on government.

“I’m interested in getting rid of dependency,” @RealBenCarson said at #CPAC2015.

Carson’s comment came in response to a question about how he would attract minorities as a Republican candidate should he decide to run. He said he would “tell them the truth.”

Spreading a message about cultivating opportunity rather than dependency, the retired Maryland surgeon said, will attract struggling Americans, including African-Americans, to the Republican Party and not to a Democratic Party that “only wants to cultivate their votes.”

Carson was greeted by standing ovations both after a brief speech and after he answered three other questions from a moderator.

Other GOP presidential hopefuls will also answer questions during their 20-minute slots today and tomorrow at CPAC, which continues through Saturday at the Gaylord Resort and Convention Center just outside Washington in National Harbor, Md.

In his other responses, he said of the ISIS terrorist group that he would “destroy them first” and not tie the military’s hands in doing so.

On the home front, Carson said he and other conservatives have to “call out” those he described as “purveyors of division, no matter where they are.” Ben Carson begins to address a packed room of supporters after his speech to the main CPAC crowd at Gaylord Resort and Convention Center. (Photo: Ken McIntyre/The Daily Signal)

Conservatives, he said, “don’t pick and choose favorites” among enterprises and interest groups.

Parents and teachers, Carson said, “don’t need some central government telling them how” to set up and enforce standards of excellence.