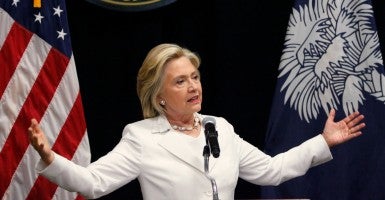 There’s new evidence that the investigative record has long been incomplete on the administration’s actions surrounding the Sept. 11, 2012, terrorist attacks on the U.S. compounds in Benghazi, Libya.

Ironically, it is longtime Clinton confidant Sidney Blumenthal who provided the emails.

Blumenthal, who The New York Times has reported had business aspirations in Libya, turned over his email exchanges with Clinton as part of a committee document request prior to his deposition last week.

A statement issued Monday by the Republican-led committee stated that the emails “should have been, but were not, [previously] turned over in response to committee requests.”

“Once again the Benghazi Committee uncovers information that should already be part of the public record but was not made available to the American people or congressional investigators,” said Committee Chairman Trey Gowdy, R-S.C. “These emails should have been part of the public record when Secretary Clinton left office and at a bare minimum included when the State Department released Clinton’s self-selected records on Libya.”

In yesterday’s statement, Gowdy asked the State Department to provide the House their copies of the emails by the end of the day, if they have them. The State Department had earlier claimed it already passed onto the committee all Benghazi-related emails from Clinton’s private server, as required under a court order.

“Before today, Chairman Gowdy had not officially released a single email from a single witness in this entire investigation, which has lasted more than a year. Now, he has apparently decided that this one witness is so critical that his emails—and his alone—must be released,” said Cummings in a statement.

Blumenthal is a former aide to President Bill Clinton and a one-time reporter for The Washington Post, The New Yorker and Vanity Fair. Part of the reason for the controversy over his role in possibly advising Secretary Clinton via her private server is that the White House had reportedly barred him from working for the State Department. At the time, Obama officials were said to blame Blumenthal for negative stories about Barack Obama when he faced Clinton in the Democratic primary.

Excluded from the State Department, Blumenthal was hired by the Clinton Foundation and communicated with Secretary Clinton through her private server as he allegedly positioned himself to develop business relationships with the government of Libya after the ousting of dictator Muammar Gaddafi.

Some of the emails indicate that Clinton received intelligence and advice from Blumenthal. The emails were not turned over previously in response to congressional requests or Freedom of Information Act requests.

The emails show that Clinton was not just a passive recipient of memos or that she did not read them. They include an excerpt in which Clinton asked Blumenthal for information before official meetings with foreign officials. In another email, Clinton responds to a memo Blumenthal sent by stating, “This strains credulity based on what I know. Any other info about it?” And in other emails, Clinton prods Blumenthal to “keep ‘em coming,” referring to intel memos and information Blumenthal had passed along.

According to the Benghazi Committee, Blumenthal also “[planted] stories regarding the secretary’s role in Libya policy and the aftermath of the attacks in Benghazi.”

One email from Blumenthal advises Clinton, “When Qaddafi himself is finally removed, you should of course make a public statement before the cameras wherever you are, even in the driveway of your vacation house … The most important phrase is: ‘successful strategy.’”

Other emails read, “H: Got done and published. Sid” and “H: Got all this done. Complete refutation on Libya smear. [Hillary Clinton adviser] Philippe [Reines] can circulate this links. Sid”

“It is significant our top diplomat was directly receiving unvetted intelligence information, which may have come from sources with financial interests in Libya,” said Gowdy. “It is clear from these emails Secretary Clinton encouraged Mr. Blumenthal to send them in some instances calling into question her previous characterization of them as ‘unsolicited.’”

Clinton’s unusual use of a private server for some government business at the State Department means that independent sources are unable to search it for any public emails and documents. After the private server was exposed last year, Clinton gave the State Department 30,000 emails that she determined were official in nature. She admitted deleting and then wiping her server of more than 30,000 other messages that she says were private in nature.