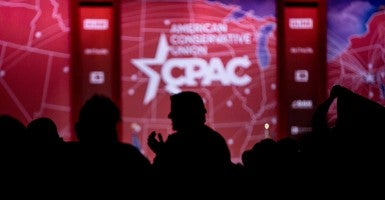 Day two of the 2015 Conservative Political Action Conference began at the same fevered pitch as the opening act Thursday. Presidential hopefuls drew cheers and jeers—and plenty of tweets as well.

Two of my favorite men on one stage ???? #CPAC2015 @seanhannity and Marco Rubio pic.twitter.com/Q3xKntpm3N

Rubio spoke about his social conservatism and passion for life.

He also stressed his outsider status and his future ambitions.

When it came to immigration, Rubio spoke of regrets on his role in the bipartisan.

Some people made fun of him.

But Perry had plenty of fans.

I really like @GovernorPerry. I'd like to see him as Secy of Homeland Security for President @tedcruz. #CPAC2015 #tcot

I know who will win, @GovernorPerry "@bethreinhard: I think @JebBush just challenged Rick Perry to a jobs-off #CPAC2015"

During the speech, he demonstrated his support for Israel.

Israel should have right to exist as Jewish state….AMEN @GovernorPerry #CPAC2015

Perry also took a shot at President Obama by yearning for the Jimmy Carter years.

"My plan will balance the budget in just 5 years." -Rand Paul #CPAC2015 #StandWithRand

Endless red "I Stand With Rand" shirts and buttons at in the main #CPAC2015 ballroom in anticipation of Paul's speech pic.twitter.com/oSroXKieCH

This was despite Paul being delayed by a Senate vote.

"At this time, Senator Rand Paul has been delayed due to a vote. He is expected to speak at mid-day. We will keep you posted." #CPAC2015

Things got heated later in the day as former Florida Gov. Jeb Bush took the stage. The room—including the press filing center—was packed, with many people standing in the aisles to watch Sean Hannity interview the likely 2016 contender.

Talk of walkout begin to swirl.

I like Rand paul, but I can't stand his supporters. A walk out on Jeb? How old are you? #CPAC2015

Bush was greeted with a mixed reaction from the crowd.

When pressed by Hannity on his views, Bush’s fans gave him hearty applause.

@DylanByers Without a doubt the best speaker yet at CPAC was Gov Jeb Bush.

Some questioned who these fans really were.

Jeb Bush bussed people into #cpac2015 for his speech.

Day three looks to be just as fun.