Workers of the World Unite, and the Left Hates It 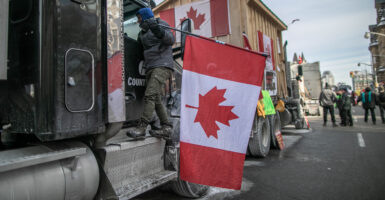 The workers are uniting against government mandates and the left now calls it fascism.

What began as a GoFundMe campaign for Canadian truckers who lost their jobs due to COVID-19 mandates for cross-border travel turned into a massive “Freedom Convoy” that drove across Canada and into the capital, Ottawa.

This is how Trudeau addressed the protest:

“I have attended protests and rallies in the past, when I agreed with the goals, when I supported the people expressing their concerns and their issues,” Trudeau said. “Black Lives Matter is an example of that. But I have also chosen not to go anywhere near protests that have expressed hateful rhetoric, violence towards fellow citizens, and a disrespect, not just of science, but of the front-line health workers, and quite frankly, the 90% of truckers who have been doing the right thing to put food on our tables.”

Let’s break this down.

Canada’s prime minister supports protests he agrees with. How brave!

Are we really to believe that the Black Lives Matter protests didn’t include “hateful rhetoric” and violence? They certainly didn’t practice social distancing or universal mask use when that was demanded by the capital “S,” science.

Unlike those “mostly peaceful” protests that ended up in many cases burning down large sections of cities, no arrests or police incidents have occurred so far as a result of the Freedom Convoy.

Trudeau concludes that these workers—the same ones he effusively praised in 2020—should just shut up, keep their heads down, and keep feeding us, even though many will be out of work and won’t be able to feed themselves because of his policies.

To double down on this remarkable rhetoric and leadership, Trudeau suddenly abandoned his country’s capital, citing “safety concerns,” and came to the United States.

All that honking was just too much.

Trudeau, who has been vaccinated and boosted, then tested positive for COVID-19.

The Canadian prime minister wasn’t alone in his lambasting of the truckers. The media, always eager to bring truth to power and all that, jumped in on the put-downs.

Media outlets portrayed the whole operation as some kind of dark, pernicious plot by deplorable people and sinister foreign actors. Some touted the high vaccination rates of Canadian truck drivers as evidence that this protest is somehow not genuine.

Is it so ridiculous to think that truck drivers are simply banding together as a sign of solidarity against what they see as an unjust mandate that affects fellow workers in their industry?

As videos of the convoy attest, this isn’t a small group. It’s thousands of trucks and tens of thousands of people. The line of trucks that drove into Ottawa was likely the longest convoy of vehicles ever. It was certainly one of the longest.

It’s a genuine outpouring of frustration from truckers who have worked to keep the economy and supply chain of their country, to say nothing of the global economy, moving in troubled times.

When countless people were able to switch to remote work and other arrangements when the pandemic began, these men and women stayed on the roads to make sure the necessities and comforts of life kept moving and got to where they were wanted and needed.

Again, Trudeau and many on the left acknowledged that until the truckers broke with the narrative.

What the protesters have received in response is derision from the Canadian government and sneering and smearing by media outlets.

A Washington Post cartoonist depicted the convoy with the word “fascist” drawn on the side of each truck. Everything the left doesn’t like is fascist, you see.

What’s notable about the left’s response to the Freedom Convoy is how it completely undermines the idea that the left is on the side of the worker.

Sometimes The Babylon Bee, the satirical website, really gets to the heart of a matter better with comedy than anything else.

The left has morphed into the political movement of an elite, global managerial class that believes it has the right to rule and govern in any way it sees fit.

It believes that any policy—no matter how repressive—that suits its cultural beliefs, tastes, and general political milieu must be made mandatory.

Opposition is inherently illegitimate as the left sees it.

And those who stand in opposition are not to be reasoned with. They are to be dismissed, ridiculed, bullied, and smashed into submission by the state and the Big Tech companies that do their bidding. Opponents deserve neither sympathy nor decency from the global movement of diversity, equity, and inclusion.

But, as one trucker wrote for Newsweek, this movement in Canada is unlikely to fade. The truckers won’t stay quiet, and people are becoming aware that something is rotten in the heart of the presumably free societies of the Western world.

The petty tyrannies of a failed ruling class are becoming as difficult to ignore as the honking in Canada’s capital.