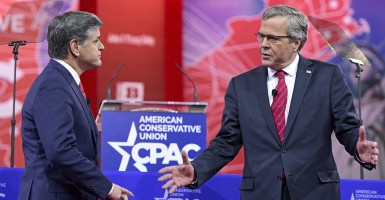 If Jeb Bush was having second thoughts as heckling broke out, he didn’t show it during his rocky first few minutes this afternoon in front of a ballroom full of conservatives.

The former Florida governor and likely Republican candidate for president just kept talking as voices in the crowd at the Conservative Political Action Conference, or CPAC, booed and yelled.

Some chanted “Common Core” as a taunt well before the topic of Bush’s support for the controversial education standards came up at the gathering in National Harbor, Md., just outside Washington, D.C.

At one point, Bush acknowledged that some in the audience were “angry” about his support for allowing a path to legal status for immigrants here unlawfully.

He neither requested nor got any help from Fox News host and conservative commentator Sean Hannity, his interviewer during his 20-odd minutes on stage. But by the time their Q&A session ended, the hecklers had been quieted and Bush had won plenty of applause—some coming from those his camp clearly arranged to attend.

Many conservatives are wary of Bush, seeing him as an establishment Republican who is too liberal on immigration and Common Core. (Watch the video below to see Bush’s answers on those two topics.)

If the son and brother of the past two Republican presidents had hoped to get credit for scrapping a speech and allowing his skeptical inquisitor to be Hannity, a longtime proponent of “bold color conservatism,” the move seemed to pay off.

Some excerpts from Bush’s answers to Hannity’s questions:

1. On the boos that greeted him, despite his record of cutting taxes and spending as governor: “For those who made an ‘ooooooh’ sound, is that what it was? I’m marking it down as neutral, and I want to be your second choice if I decide to go beyond this.”

2. On his mother’s nationally televised opinion in 2013 that she wasn’t sure about another Bush as president: “That was a little difficult, but since that time she’s had a change of heart.”

4. On his top five priorities, if elected, in his first 100 days as president: “By executive order, undoing what the president has done … using authority he doesn’t have. Creating a regulatory reform agenda that allows for investment to take place in our country. Presenting the Congress a plan to reform our tax code so that … [foreign] companies invest in our country to create high-wage jobs. We need to get back to high, sustained economic growth. And sending the signal to the rest of the world that we’re going to be their partner for peace and security.”

5. On his past remark at CPAC that conservatives too often are labeled “anti-everything”: “I think conservatives in Washington have been principled in opposing the overreach [by the Obama administration]. … But over time, we have to start being for things again [and] offer compelling alternatives to the failed tax policies, the failed regulation policies, the broken education system.…

“There are a lot of other conservatives that haven’t been asked. They don’t know they’re conservatives. If we share our enthusiasm, our love for our country, our belief in our philosophy, we will be able to get Latinos and young people and other people.”

6. On his “divide with the conservative movement” over his immigration position: “The simple fact is, there is no plan to deport 11 million people. We should give them a path to legal status, where they work, where they don’t receive government benefits, where they don’t break the law, where they learn English and where they make a contribution to our society.”

7. How about border security? “Let’s do it. … Let’s control the border. There’s nothing wrong with that. That’s what a great nation has to do. … [But] this nation needs to start growing at a far faster rate than we’re growing today. We have to be young and dynamic and aspirational again —and for all the young people in this room to be able to get a job with purpose and meaning.”

8. On President Obama’s executive actions to allow up to 5 million illegal immigrants to stay and work: “The simple fact is the president has gone way beyond his constitutional powers to do this, and the Congress has every right to reinstate their responsibility for what law is about.” 9. On whether American citizens should have first shot at jobs: “What we ought to be focused on is growing the economic pie and growing it at a rate that looks more like the ’80s in America, growing it closer to 4 percent [annually] not 2 percent. If we stay at this anemic economic rate, then your argument becomes valid. But if we grow at 4 percent, there’s going to be opportunities for all.”

10. On his support for Common Core: “My belief is that our standards have to be high enough whwre a student going through our system is college- or career-ready. And that’s not what’s happening right now.”

12. Could he lower taxes even with the nation’s $18 trillion in debt? “You can lower taxes and create more economic opportunity that will generate more revenue for government than any of the most exotic tax plans that Barack Obama has. Yes.”

13. On what he would do as commander in chief to defeat ISIS: “We can’t disengage from the world and expect a good result. As we pull back, voids are filled. Iraq is the best example of that. … We need to re-establish relationships with countries that we’ve managed to mess up [and] build a coalition to isolate and then put ISIS [in] a noose and take them out. … That has to be done with American leadership.”

14. On President Obama’s labeling of ISIS: “This total misunderstanding of what this Islamic terrorist threat is is very dangerous, because it doesn’t allow you then to have the right strategy to deal with this. We need to heighten awareness of what this threat means and be honest about it. Which is why I think [Israeli] Prime Minister [Benjamin] Netanhayu’s visit [to address a joint session of Congress] is going to be really important.”

15. On a political label for himself: “I would describe myself as a practicing, reform-minded conservative, that I’ve actually done it.”