Virginia Farmer Hopes to Get Conservation Group Off Her Back 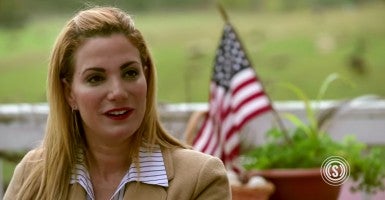 Virginia farmer Martha Boneta’s desire to have an environmental conservation group replaced as overseer of her property has moved a step closer to reality.

Officials of the Piedmont Environmental Council have agreed to a meeting Friday to talk about ending a bitter standoff with Boneta by handing off enforcement duties for a conservation easement on Boneta’s farm to another environmental organization in Virginia.

Martha Boneta, like most victims in these cases, does not have near the resources of money and political power as the PEC. If such battles can be fought across the nation in the same way, it will have a profound effect on how such groups behave in the future. Perhaps they will be less aggressive and more willing to respect the property owner.

Under the proposed arrangement, the Virginia Outdoors Foundation would take over responsibility for the conservation easement on Boneta’s farm in Paris, Va. Friday’s meeting is set for the foundation’s offices in Richmond.

Conservation easements are legally binding agreements in which property owners promise to withhold land from commercial development in exchange for tax breaks or money. In 2006, Boneta bought 64-acre Liberty Farm with the easement attached, but did not receive either tax breaks or money.

The Piedmont Environmental Council, a conservation group that manages 51 easements on 7,600 acres of land in Virginia’s Hunt Country, has been at odds with Boneta over the easement almost since it sold her the property.

On Nov. 6, the disagreements were aired at a hearing set up by the Virginia Outdoors Foundation. The organization, chartered by the Virginia General Assembly in 1966 to monitor easements and promote land conservation, is co-holder with the Piedmont Environmental Council of the easement on Boneta’s farm.

After coverage of the dispute by The Daily Signal and other media outlets, appearances by Boneta on national TV shows and expressions of shock by neutral observers about how the environmental council had treated her, Boneta’s attorney, William Hurd, offered a solution.

Hurd asked the outdoors group beforehand to consider at the meeting a motion to take over all easement enforcement if Boneta and the environmental council could agree.

Following 20-minute presentations at the meeting by Boneta and the council and testimony by witnesses, the outdoor foundation’s trustees voted 6-0 to approve a resolution.

Over the next 2½ weeks, the sides sparred. A lawyer for the environmental council sent a letter to the outdoors foundation saying Boneta was conducting a disinformation campaign and hadn’t submitted a single document to back up her claims of harassment, trespassing and other mistreatment.

Her lawyer, Hurd, wrote to another lawyer for the environmental group, Turner Broughton, to say he was “disappointed by what seems to be some question whether your client will be willing to meet with us along with [Virginia Outdoors Foundation] staff…”

On Nov. 25, though, the sides announced they would meet at the foundation’s offices Dec. 5. This meeting may have turned the tide for Martha Boneta in her battle with the Piedmont Environmental Council.

Hurd and others said they thought the hearing early last month marked a major turning point.

The dispute was out in the open, and Boneta had  become a champion for land-rights activists nationwide.

More than 100 turned up for the hearing and more than 40 came early to rally and chant, “Hey hey, ho ho, the PEC has got to go.”

The hearing itself did not go well for the Piedmont Environmental Council.  David Johnson, former director of the Virginia Department of Conservation and Recreation, said the council’s enforcement tactics jeopardized the very notion of easements in Virginia.

“I’ve been a regulator,” Johnson told the trustees of the Virginia Outdoors Foundation.  “The hallmarks of a good regulatory program are consistency, predictability and accountability.”

The absence of those elements, Johnson said,  creates “a chilling effect” on the willingness of landowners to put their property into easements.

After the hearing, the environmental council seemed more than willing to reach an agreement.

“We are very open to finding a solution,” Chris Miller, the council’s president, said that day.

Although the environmental council said Boneta had produced no evidence to support claims of mistreatment, she did obtain documents from the group as part of her legal action and through Freedom of Information Act requests.

And those documents, which she provided to The Daily Signal, appear to bolster her claims that the environmental council worked closely with Fauquier County officials in a sustained campaign to harass her and interfere with her activities on her farm.

The group’s actions ranged from inspections in which its representatives went through Boneta’s clothing, to zoning enforcement it appeared to coordinate with the county, to apparent knowledge of an IRS audit of Boneta’s finances.

The emails paint a disturbing picture of intimidation by government and quasi-government agencies with the awareness if not the direction of the environmental council and a key elected official on the Fauquier County Board of Supervisors, Peter Schwartz. The Boneta Bill, as it is known, did not sit well with the Piedmont Environmental Council or the Fauquier County government.

The legislation “protects customary activities at agricultural operations from local bans in the absence of substantial impacts on public welfare,” according to the Farm-to-Consumer Legal Defense Fund. It also “prohibits localities from requiring a special-use permit for a host of farm-related activities that are specified in the bill.”

In other words, it was legislation designed to benefit small farmers such as Boneta and curb the power of government and those who enforce easements on properties such as hers.

In the run-up to the vote in the Virginia General Assembly, the county opposed the bill in Richmond and made its taxpayer-funded lobbyist available to lawyers for the environmental council and others.

Emails show Heather Richards, the environmental organization’s vice president of conservation and rural programs, making direct contact with the county’s lobbyist, Eldon James, and arranging to provide him with information about Boneta’s problems with zoning authorities and to meet with him in Richmond.

“Taxpaying citizens couldn’t have Eldon James do their bidding in this manner,” said Bonner Cohen, senior fellow with the National Center for Public Policy Research, a free-market organization that focuses on property rights:

He’s representing the county government, but he’s doing the bidding of the [Piedmont Environmental Council] and acting as an agent of the PEC. The average citizen can’t call up the county lobbyist to have him operate this way, so why should the PEC, as a nonprofit land trust, be permitted to do this?

Other emails show the husband-and-wife real estate team of Phillip and Patricia Thomas, longtime members of the environmental council, raising questions about Boneta.

Phillip Thomas is owner of Thomas and Talbot Real Estate in Middleburg, Va. He owned Liberty Farm before selling it to the environmental group, which sold it to Boneta.

Since I haven’t heard from you, now you’re hearing from me again, reference the woman Martha Malawar [Boneta], Fauquier County, Gap Run Road, near Paris, who in my opinion, got a hell of a lot of money out of your bank using the property as collateral.

The Thomases later attempted to buy the mortgage on Liberty Farm.

>>> Green Group Under Scrutiny for Trespassing on Woman’s Farm Bonner Cohen, of the National Center for Public Policy Research, speaks in support of Martha Boneta.

Another series of emails shows a lawyer for the Piedmont Environmental Council reaching out to Schwartz to make sure “the right witnesses are lined up” for a zoning hearing scheduled that night.

The environmental council has said it conducted a total of nine inspections of Boneta’s property. Numerous emails, however, show Patricia Thomas, Richards, Schwartz and others mentioning driving by or visiting the farm to check for violations.

The emails also show Richards, the environmental group’s vice president, asking the Virginia Outdoors Foundation to join in installing video surveillance cameras to monitor Liberty Farm. The foundation confirmed this to The Daily Signal, saying it declined to participate.

Other correspondence shows the Thomases coordinating with county officials from Schwartz on down about zoning enforcement on Boneta’s property.

In August 2012, the Fauquier County Zoning Board of Appeals voted to uphold a series of $15,000-per-day fines against Boneta based on amendments to the zoning ordinance that Boneta maintains were made specifically to go after her. The zoning citations are the subject of Boneta’s lawsuit against the county.

Among other emails acquired by The Daily Signal:

Schwartz figures in other communications.

In a Sept. 20, 2011, email to Kim Johnson, the zoning official responsible for issuing the citations against Boneta, the county supervisor writes: “I would like to see these zoning infractions to be aggressively enforced.”

In a July 16, 2012, email to Johnson, Hushhour and Richards, the elected official sends an invitation for a meeting of zoning officials and the environmental council on “Liberty Farm and the [zoning] issue.”

It remains to be seen whether the Piedmont Environmental Council is willing to negotiate the end of its involvement with Boneta’s farm.

Even if the environmental group relinquishes its responsibilities for easement enforcement, Schwartz will remain on the county Board of Supervisors, Hushour will continue to work in county zoning and Richards will still be in the neighborhood.

>>> Green Group Accused of Colluding with Government on Zoning

But, as DeWeese said, the battle finally has been joined between a landowner willing to persevere and a powerful conservation organization that is funded generously by some of the wealthiest people in America. And that green group, the documents indicate, has worked with the local government to achieve its ends.

Now, though, property rights activists across the country are following the case. They stand ready to work for reform legislation in their own states, using this conflict as a model.

As Cohen said to the trustees of the Virginia Outdoors Foundation, referring to the actions of the Piedmont Environmental Council:

How many landowners, having seen what the PEC has done to Martha Boneta, would want to risk the same thing happening to them? What is to keep another power-hungry, copycat land trust aggregating to itself the same police-state powers the PEC has used against Martha Boneta?