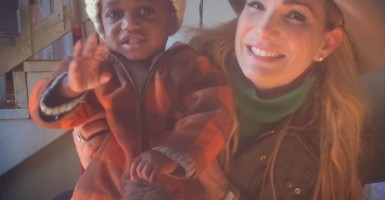 RICHMOND – Martha Boneta’s eight-year battle with an environmental group over a conservation easement on her farm in Virginia’s Hunt Country moved closer to resolution yesterday as another organization agreed to take over enforcement activities.

Boneta and representatives of the Piedmont Environmental Council appeared at a meeting of the Virginia Outdoors Foundation’s board of trustees in the Virginia General Assembly building here. The foundation is a co-holder of the easement on Boneta’s farm.

Each side made 20-minute presentations about the easement on Boneta’s property and what she has called abuses on the part of the environmental council in its enforcement of the terms.

Easements are agreements landowners enter into with conservation organizations such as the Piedmont Environmental Council. The property owners receive cash or tax breaks for agreeing to limits on development. Boneta did not receive tax breaks because the easement was attached when she bought the farm.

After the presentations, the Virginia Outdoors Foundation’s seven-member board voted 6-0 to adopt a resolution expressing its willingness to take over enforcement activities.

Boneta, who has accused the Piedmont Environmental Council of colluding with government officials and realtors to force her off her property, said the resolution “gives me hope for the future.”

Stephanie Ridder, who is both chairman of the outdoors foundation’s  board and a member of the environmental council, abstained.

Under the current arrangement, the foundation is concerned with the land and outer appearance, and the council monitors the architecture and structures on Boneta’s 64-acre Liberty Farm in the Paris section of Fauquier County. “I’m grateful for the actions taken today by the [foundation] board members, as it offers a way forward,” Boneta told The Daily Signal in an interview after the meeting.

Leaders of the environmental council emerged from the meeting expressing their willingness to negotiate an arrangement with Boneta that would enable the outdoors foundation to assume control of the council’s portion of the easement.

“We are willing to have this discussion,” said Chris Miller, president of the Piedmont Environmental Council. Miller added:

Our concern has been with our obligations under state law to enforce the easement. But we are very open to finding a solution. We are pleased to see Martha doing so well with her agricultural activities.

The resolution says the Virginia Outdoors Foundation is willing to take full control of the easement, but a formal proposal must be made with Boneta and the Piedmont Environmental Council in agreement.

Turner Broughton, an attorney for the environmental council, suggested his clients would be willing to “enter into negotiations with Boneta in response to today’s action.”

“We are certainly willing to discuss the resolution,” Broughton said.

State Del. Brenda Pogge, R-James City County, attended the meeting and told The Daily Signal afterward that she plans to introduce legislation in the upcoming session of the Virginia General Assembly to reform easements on public lands.

“I’m a citizen legislator who is outraged by the abuse we have seen in this case,” Pogge said, adding:

“The way Martha was treated does not resemble truth, justice and the American way. That’s what we need to get back to. My bill would address the use of easements on public lands that would include schools, firehouses and other public buildings. It’s just a start. My bill would not address private lands.”

About 100 people were present for the foundation’s board meeting, which was preceded by a rally in front of the General Assembly that included about 40 property rights activists.