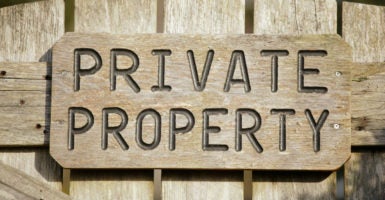 The case centered on the court's interpretation of the Fifth Amendment's Takings Clause. (Photo: iStock Photos)

In last week’s decision in Murr v. Wisconsin, the Supreme Court upheld the Wisconsin State Court of Appeals’ ruling that two waterfront lots should be treated as a single unit in a “regulatory takings” case.

In a blow to constitutionally guaranteed property rights, the decision denied a family just compensation for having the value of their land eviscerated by local government action. (Justice Neil Gorsuch did not participate in the decision of this case.)

The Murrs are siblings who inherited from their parents two adjacent waterfront properties, along the lower St. Croix River in Troy, Wisconsin. The Murrs wanted to sell one of the lots and develop the other.

Unfortunately for the Murr family, the lots had been merged under local St. Croix County zoning regulations, and the County Board of Assessments denied the Murrs’ request for a zoning variance to allow their plan to proceed.

The Murrs challenged this in state court, arguing that the state had effectively taken their second property by depriving them of practically all use without paying just compensation, as required by the Takings Clause of the Fifth Amendment to the Constitution.

That clause provides that “private property [shall not] be taken for public use, without just compensation.”

Affirming a lower state court, the Wisconsin Appeals Court held that the takings analysis properly focused on the two lots together and that, using that framework, the merger regulations did not effectuate a taking.

The Murrs’ appealed to the Supreme Court.

The court (in an opinion by Justice Anthony Kennedy, joined by Justices Stephen Breyer, Ruth Bader Ginsburg, Sonia Sotomayor, and Elena Kagan) found that in determining what the relevant unit of property is, courts must ask whether the owner would have a reasonable expectation to believe the property would be treated as a single or separate units.

The court held that in regulatory takings assessments, courts must give substantial weight to how state and local law treat the property, evaluate the property’s physical characteristics, and assess the property’s value under the challenged regulation.

The majority concluded that there was a valid merger of the Murrs’ two plots under state law, the terrain and shape of the lots made it clear that the merged lot’s use might be limited, and the second lot brought prospective value to the first.

Thus, the Murrs’ lots should be treated as one parcel and they did not suffer a compensable taking, since the Murrs were not deprived of all economically beneficial use of the property.

Roberts’ dissent noted that in addition to looking at state and local law, the majority added a new test that looked at (1) “the physical characteristics of the land,” (2) “the prospective value of the regulated land,” (3) the “reasonable expectations” of the owner, and (4) “background customs and the whole of our legal tradition.”

Thomas penned a separate dissent, suggesting that the court should reconsider its regulatory takings jurisprudence to see “whether it can be grounded in the original public meaning” of the relevant constitutional provisions.

Although the three-justice dissent sets forth a more full-throated defense of property rights, it does little to clarify how to determine when a regulatory taking occurs.

Instead, it approvingly cites “wide-ranging” factors cited in prior Supreme Court decisions, and concludes that the ultimate question is whether the government’s imposition on a property has forced the owner “to bear public burdens which, in all fairness and justice, should be borne by the public as a whole.”

This lets state and local governments off the hook. It allows them to marshal a list of court-approved phrases to explain why a regulation does not go “too far” and take property—even though it may substantially destroy property value.

What is missing from the opinions in Murr is the recognition that any substantial net reduction in the value of a piece of property (subdivided or not) takes a certain property interest.

It is basic law that there is not a single undivided property right stemming from an item of property, but, rather, multiple property interests—what is often referred to in law school classes as a “bundle of sticks”—that can be taken in whole or in part.

Under current Supreme Court case law, if the government directly seizes (or physically occupies) a particular stick, compensation is owed for the reduction in overall property value stemming from that stick’s loss. This is the case of a physical “per se” taking.

But if the government instead enacts a rule preventing that stick from being sold or embellished by the bundle’s owner (think of the Murrs’ plan to sell one plot and develop the other), the owner likewise suffers similar reduced overall property value due to restrictions on the stick.

Under existing Supreme Court case law, however, the loss in value in the second case, unlike the first case, may well not be compensable, because the owner has not been deprived “of all beneficial use” of the overall property.

Supreme Court case law indicates that a taking may exist in the second case, depending upon a regulation’s impact, its interference in investment-backed expectations, and the character of its actions.

As a practical matter, the Supreme Court’s unclear balancing test very seldom results in a regulatory taking being found.

As a result, government is incentivized to invade property rights by using regulations, rather than physical appropriations, thereby undermining the Takings Clause’s just compensation requirement.

There is a far better way to deal with the problem of government regulatory intrusions on private property rights, one that recognizes that regulatory deprivation of any stick in the bundle should be compensable.

… the muddle and confusion of the current [takings] law is largely obviated by the simple proposition that, prima facie, the more the government takes, the more it pays. That rule applies to the outright taking of any given parcel of land or to the taking of a divided interest in property. … Under this view, the full range of divided interests, be they air rights, mineral rights, liens, covenants, or easements, are fully compensable.

The Supreme Court should take to heart Thomas’ recommendation that the court return to first principles.

In so doing, it should seriously consider adopting Epstein’s simple and straightforward approach to takings. American property owners deserve no less.