How Twitter Reacted to Conservative Presidential Pitches at CPAC 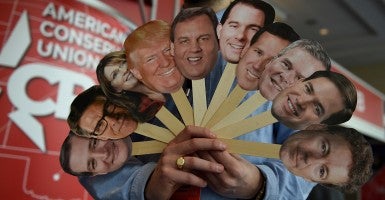 The day began with Ben Carson, the celebrated neurosurgeon, delighting a conservative audience, both in-person and on Twitter.

#BHM pioneer @RealBenCarson went from being the bottom of his class to becoming a world-renowned neurosurgeon pic.twitter.com/MqXxojrCq8

Carson called for Americans to “defund Obama’s golf” and “get rid of dependency”, among other memorable one-liners.

After Carson spoke, New Jersey Gov. Chris Christie made his case in an interview with conservative pundit Laura Ingraham.

Chris Christie Will Not Be Reading This Post, He Assures CPAC http://t.co/rHX0qVd7p5

Following a common refrain throughout the conservative conference, Christie criticized the White House.

Chris Christie: ‘Sometimes people need to be told to sit down and shut up.’ http://t.co/zMx8qTxGrJ pic.twitter.com/JoFRYDUkvn

In the end, Christie played well with the CPAC attendees, with his blunt, Jersey style.

After the Christie interview, former Hewlett-Packard CEO Carly Fiorina gave a barn-burning speech against both the president, and Democratic 2016 frontrunner Hillary Clinton.

Fiorina hit Clinton on what she described as hashtag activism.

'May like hashtags, but does not know what leadership means'… http://t.co/5rmq8VNISN #drudge-report

She also rebuked the president for his handling of Israeli Prime Minister Benjamin Netanyahu’s upcoming speech before Congress.

Is Fiorina the anti-Clinton? The media seems to think so.

Cruz: "We could have had Hillary here, but we couldn't find a foreign nation to foot the bill"

He also went after Clinton for being “too Washington.”

He says his Republican rivals do not standing up for what they believe in.

#CPAC2015 "When have you been willing to stand up against Republicans? When have you stood with the people?" – @SenTedCruz

"Youth outreach," is what Ted Cruz says when asked for short answer response to Bill Clinton.