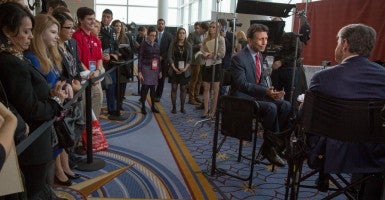 Louisiana Gov. Bobby Jindal today criticized President Obama for failing to properly combat ISIS and said the United States needs to “hunt down and kill” members of the terror organization.

Jindal spoke about the emerging threat of ISIS, the brutal terrorist group also known as the Islamic State, at the Conservative Political Action Conference, or CPAC, held outside of Washington, D.C., today.

“We don’t need a war on international poverty, we need a war on the evil radical Islamic terrorism,” the Louisiana governor said.

Jindal criticized the president for failing to deliver a comprehensive plan for “degrading and destroying ISIS” and ridiculed State Department spokeswoman Marie Harf for saying the war against ISIS can be won with more jobs—a reference to Harf’s interview with MSNBC host Chris Matthews earlier this month.

“President Obama has disqualified himself and has shown himself incapable of being our commander in chief,” Jindal said.

“President Obama has disqualified himself and has shown himself incapable of being our commander in chief,” says @BobbyJindal.

ISIS first emerged as a threat last year, and though the group has continued to murder and kill innocent people throughout the Middle East, the president has consistently said he will not put boots on the ground in the region again.

Late last year, Congress authorized the Pentagon to train and equip moderate Syrian rebels to fight ISIS, a move that was part of the president’s plan against them. But Jindal called on Congress to “give the president the war he’s asked for” and remove limitations to allow the country to fight back against ISIS.

“They need to … tell the political left we want our military leaders to do whatever it takes, not to degrade, contain or expel, but to hunt down and kill these radical Islamic terrorists,” he said.

But in addition to emboldening Congress to authorize efforts to combat ISIS, Jindal also said it’s important for Muslim leaders around the world to publicly condemn the actions of the radical Islamic terrorists.