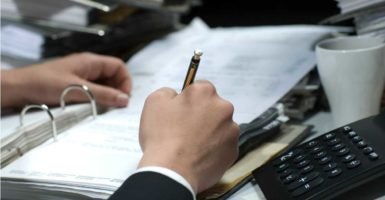 Small business owners are unable to predict how much worse regulatory burdens will get. (Photo: Caro/Ulrich /Newscom)

Jessica McBirney is a member of The Heritage Foundation's Young Leaders Program.

The National Federation of Independent Business (NFIB), an advocacy group that protects the rights of small businesses around the country, recently released two reports highlighting the deep and increasing concern of small business owners about government regulation.

The 2016 Small Business Problems and Priorities survey, published in August, found that “unreasonable government regulations” is the second-most pressing concern facing small businesses, up from fifth in the last such survey in 2012.

According to The Heritage Foundation’s research, the Environmental Protection Agency has been the most enthusiastic regulatory agency in the past several years, imposing a staggering $54 billion in new regulations since 2009.

But the EPA is not the only culprit. Overall, federal agencies have implemented 229 new major rules (rules expected to cost businesses and individuals over $100 million) since 2009. That adds up to a $107.7 billion increase in regulatory costs in just seven years.

The NFIB found the biggest small business complaints included not just the actual costs of compliance, but also the time spent doing paperwork and figuring out new requirements. As NFIB explains, “Wasting entrepreneurs’ time is a serious growth impediment.” With so much money and time tied up in regulatory procedures, small businesses are left with little opportunity or desire to grow.

Small business owners are unable to predict how much worse regulatory burdens will get. The report draws attention to expanding state and federal efforts to regulate employment and environmental issues, but no one can be sure how many of these rules will come down the pipeline.

Additionally, business owners and investors have no clue if or when the Federal Reserve will decide to raise interest rates. Uncertainty about government action prevents business owners from predicting future rules, which keeps them from making “spending and hiring decisions” and plans for the future.

Uncertainty over economic conditions stems partially from a slow and bumpy recovery from the 2008 recession. Small business owners need to feel some confidence in their knowledge of the future to plan their businesses appropriately; in the face of uncertainty, they stall.

This is underscored in NFIB’s October Uncertainty Index, an annual six-question survey of small business owners about their perceptions of the economy. The survey includes questions such as “Do you think that six months from now general business conditions will be better than they are now, about the same, or worse?” and “In the next three months, do you plan to increase or decrease the total number of people working for you?”

NFIB calculates the level of uncertainty about the economy by counting the number of “don’t know” responses.

This year’s results? Uncertainty is at a 42-year high. “High levels of uncertainty have a chilling effect on inventory investment, capital spending, and hiring,” the report explains. Business owners are “unable to incorporate that information into a forecasting or planning framework.”

Small firms account for 60 percent of new jobs since 2009, and they produced 46 percent of private gross domestic product in 2008 (the most recent year for which data is available). That nearly half of our economy is experiencing debilitating increases in regulation and record levels of uncertainty should signal the need for change.

Widespread regulatory reform and reduced government intervention are the only ways to spur growth for small businesses and improve the health of our economy.