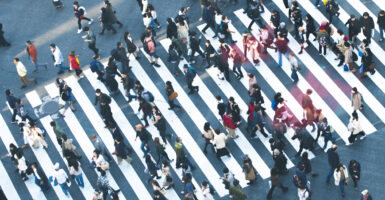 The population increased by only 0.1% in America, which is the lowest annual rate of population growth “since the nation’s founding,” according to the Census Bureau. (Photo: Marco Bottigelli/Getty Images)

In a press release published last week, the Census Bureau announced that this was the lowest annual rate of population growth “since the nation’s founding.”

To put that in perspective, the 392,665 increase in the number of people living in the United States between July 1, 2020 and July 1, 2021 was less than half the 862,320 unborn babies the Guttmacher Institute stated in its own latest estimate were aborted in 2017.

The fact that this nation’s population had an annual growth rate of nearly zero in the Census Bureau’s latest estimate should make liberal environmentalists happy. Demographically, America now seems headed in the direction they would like to see it take.

Back in 1973, John P. Holdren wrote an essay published by the California Institute of Technology’s Population Program. At the time, Holdren, who has a doctorate in physics from Stanford, was a professor at the University of California at Berkeley. He would later become the director of former President Barack Obama’s White House Office of Science and Technology Policy.

In his 1973 essay, Holdren argued that America was already overpopulated.

“Is even the present U.S. population of 210 million too large?” Holdren asked rhetorically.

“I will argue here,” he said, “that 210 million now is too many and 280 million in 2040 is likely to be much too many; that, accordingly, a continued decline in fertility to well below replacement should be encouraged, with the aim of achieving ZPG (zero population growth) before the year 2000 and a gradually declining population for some time thereafter; and that redirecting economic growth and technological change not stopping either is an essential concomitant to but not a substitute for these demographic goals.”

That same year, Holdren joined with Anne and Paul Ehrlich, author of “The Population Bomb,” in writing “Human Ecology: Problems and Solutions.” This 1973 book (which I critiqued in my 2010 book “Control Freaks”) outlined the population problem as Holdren and the Ehrlichs saw it and suggested some solutions.

“Considering present technology and patterns of human behavior, our planet is grossly overpopulated,” they wrote.

This meant government had to act.

“Political pressure must be applied immediately to induce the United States government to assume its responsibility to halt the growth of the American population,” they wrote. “Once growth is halted, the government should undertake to influence the birth rate so that the population is reduced to an optimum size and maintained there.”

Then the de-development and global redistribution could start.

“A massive campaign must be launched to restore a high-quality environment in North America and to de-develop the United States,” wrote Holdren and the Ehrlichs. “De-development means bringing our economic system (especially patterns of consumption) into line with the realities of ecology and the global resource situation. Resources and energy must be diverted from frivolous and wasteful uses in overdeveloped countries to filling the genuine needs of underdeveloped countries.”

“Redistribution of wealth both within and among nations is absolutely essential, if a decent life is to be provided for every human being,” they concluded.

It should be noted that the decline in U.S. population growth in recent years has not been uniform across the country and even this past year’s decline is not solely attributable to the COVID-19 pandemic.

“Population growth has been slowing for years because of lower birth rates and decreasing net international migration, all while mortality rates are rising due to the aging of the nation’s population,” Census Bureau demographer Kristie Wilder said in the Bureau’s press release.

The slow population growth from July 2020 to July 2021, the release stated, “can be attributed to decreased net international migration, decreased fertility, and increased mortality due in part to the COVID-19 pandemic.”

Regionally, the population decreased 0.6% in the Northeast and 0.1% in the Midwest. In the South, it increased by 0.6%.

What if, in order to keep the population in check, the Americans who invented COVID-19 vaccines had never been born?

Human beings are not a liability for this planet that God gave us. They are the reason it exists. And when they are allowed to live in freedom, they make life better, not worse, for the generations that follow them.