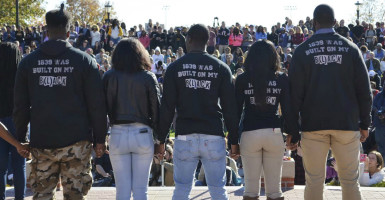 Members of the protest group Concerned Student 1950 join hands at a during a press conference Nov. 9 at the University of Missouri campus in Columbia, Mo. (Photo: Elizabeth Loutfi/Reuters /Newscom)

Too many college students are more interested in silencing opposition than fostering ideas, education experts said at a forum in Washington, D.C.

“The burning irony of today’s popular campus movement is that it’s built on supplanting knowledge with ignorance, inquiry with activism, and freedom with conformity,” Peter Wood, president of the National Association of Scholars, said during the Heritage Foundation panel.

“We got here by forgetting that knowledge, inquiry, and freedom are fragile attainments that always have their enemies. Rather than defending it against those enemies, we slept,” he added.

Charles Kesler, a professor of government at Claremont McKenna College, said free men used to seek understanding and justice through the liberal arts.

Students of the “’60s new left” appealed to Abraham Lincoln and the Declaration of Independence to motivate national reforms, he explained at the Heritage event Friday.

But not anymore, said Kesler, who is also a senior fellow at the Claremont Institute. Students on the left now “don’t have a good word to say for America, really,” Kesler added. “For them, America and the West represent legacies of racist, sexist, imperialist, capitalist power.”

For these students, education is about power, not justice, he said.

University of Missouri President Tim Wolfe recently resigned because the university football team threatened not to play until he had departed. Their grievance against him? “Structural racism.”

Pointing to Wolfe’s resignation, Wood suggested that students have started a “crybully” movement, clamoring not for education, but for privileges to which they believe they are entitled.

Instead of viewing higher education as “a privilege to be earned by … sustained intellectual effort, humility, and the task of taking up what great minds have already discovered,” Wood said, students increasingly view college as their “due” and “look on anything that hampers their free enjoyment of what goes on on campus—sex, drugs, rock and roll—as an insult … and an outrage.”

Kesler said student demands have spread across the country.

“I’m not recommending it,” he chuckled, referencing thedemands.org—a website that lists 77 colleges and universities where students have demanded apologies, tuition, events, classes, and other relief from “systemic and structural racism on campus.”

“Rather than ordering young minds, administrators have been ordered to resign,” Arthur Milikh, the panel host and assistant director of The Heritage Foundation’s B. Kenneth Simon Center for Principles and Politics, wrote in a recent article for The Daily Signal. Milikh added:

Having become convinced that universities service non-intellectual ends like multiculturalism, social justice, and pre-professionalism, presidents and administrators have little authority outside bookkeeping, job-placing, and safe space-creating.

>>> Watch the entire event: ‘Who Rules the Universities?’