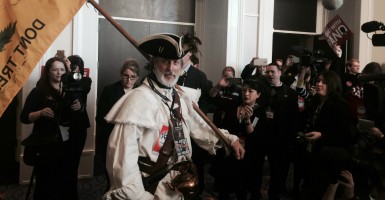 In an act of protest against 2016 hopeful and former Florida Gov. Jeb Bush, a crowd of attendees at the Conservative Political Action Conference walked out in the middle of his speech.

Bush spoke at the Conservative Political Action Conference, or CPAC, outside Washington, D.C., today. The former Florida governor spoke to a packed house, but a group of less than 100 attendees walked out of Bush’s speech. William Temple, a staple of conservative conferences who dresses in colonial attire and waves a Gadsden flag, led the quiet revolt.

Instead of giving a traditional speech before those attending the annual conference, Bush participated in a 25-minute question-and-answer session with Fox News host Sean Hannity. To bolster support for the White House hopeful, Bush’s “Right to Rise” PAC bused in supporters from nearby Washington, D.C.

Bush formally announced he would explore a run for president late last year. Since then, he has been working to shake the narrative of a “Bush dynasty” and differentiate himself from his father, George H.W. Bush, and his brother, George W. Bush, both former presidents. Though Bush laid out his “conservative” vision for his White House—should he win in 2016—and dubbed himself a “practicing reform-minded conservative,” those who walked out argued Bush represents the “establishment” wing of the Republican Party and didn’t fit in at the conservative conference.

Levitt watched Bush for less than a minute, he said, and then walked out.

Both Temple and Levitt found themselves in the company of those in agreement, and at one point, Temple was joined by another man in a tricorn hat: James Manship, who was dressed as George Washington.

When @jebbush took the stage at #cpac2015, these gentlemen staged a walk out. You can hear in this video why they decided to take action. #cpac

While addressing a bevy of television cameras, Temple and Manship rejected “establishment” Republicans, but were interrupted by a choir of young conservatives chanting “USA, USA” and “Stand with Rand,” a reference to Kentucky Sen. Rand Paul.

Tim Weppner, 20, told The Daily Signal he’d rather see Paul become the commander in chief in 2016 and said he didn’t understand why Bush was addressing the conservative conference.