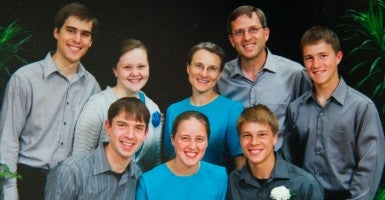 The Hahn family founded and runs Pennsylvania-based Conestoga Wood Specialties. They established their business — the manufacture of custom wood kitchen cabinets and parts — on Christian values and say they’re committed to applying those values in the workplace. (Photo: Alliance Defending Freedom)

The case of another family-owned business also was heard by the high court, though — that of Conestoga Wood Specialties and  the Hahns,  Mennonite Christians from East Earl, Pa. The Hahns established their business — the manufacture of  custom wood kitchen cabinets and  parts — on Christian values and say they’re committed to applying those values in the workplace.

Why did they go to court, represented by the Alliance Defending Freedom? Regulations drawn up by the Department of Health and Human Services to implement the Affordable Care Act, or Obamacare, included the HHS rule mandating that employee insurance plans cover 20 forms of contraception, four of which are considered seen by many to be potentially life-ending.

>>> What ‘Holly Hobby Lobby’ Learned … and Her Next Move

Although Conestoga Wood employs far fewer — 1,200 – than Hobby Lobby’s 23,000 workers, the family shared just as joyously in the court’s  decision. In a 5-4 ruling, the justices said the government cannot compel certain family-owned businesses to provide abortion-inducing drugs or devices in violation of deeply held religious beliefs.

Anthony Hahn, president and CEO of Conestoga Wood and son of founder Norman Hahn, agreed to answer questions from The Daily Signal to share the family’s thoughts on why they had to pursue the case and what the ruling means to them and  their employees.

The Daily Signal: What does religious freedom mean to the Hahn family, and why was it worth it for Conestoga Wood Specialties to go all the way to the Supreme Court?

Anthony Hahn: We should be allowed to practice our faith without being coerced or forced into doing something that would go against our deeply held religious beliefs.  Every American citizen has a right to exercise his or her religion, and that right should not have to be given up because of government intervention or mandates.

As a Christian and firm believer in the sanctity of human life, it was definitely worth it to go to the Supreme Court to protect those innocent little lives who cannot speak for themselves.

Q: Some —activist Sandra Fluke, for example— argue that the Supreme Court’s decision  sets a dangerous precedent that can be used “to go far past birth control.”  What do you think of this sort of reaction to what you sought to achieve?

A: I don’t think this will be the case. The decision the Supreme Court handed down focused on the abortion pill and birth control mandate of the Affordable Care Act and is not automatically expanded to other objections.

The Supreme Court decided that this particular mandate is in violation of the Religious Freedom Restoration Act, and that the government cannot meet the “compelling interest” test to enforce the mandate because it is being applied unfairly and inconsistently. But the government may have compelling interests to enforce other procedures universally, and could satisfy RFRA in other kinds of cases.

We were trying to achieve the protection of one of our fundamental rights, religious freedom, and we are grateful and humbled that God through the Supreme Court made this decision to protect every American citizen.

Q: For those unfamiliar with Mennonites, could you briefly explain your faith? How  did it lead you to object to Conestoga Wood Specialties being forced by the HHS mandate to cover certain drugs and devices in your employee health plan?

A: We are Christians and chose to live out our Christian faith as Mennonites. We believe the Bible to be the inspired Word of God. As Mennonites we choose to use the Bible as our guide for living regardless of what our culture dictates.

We believe that life begins at conception, the instant that a sperm and egg unite, and that the embryo is a human life and is sacred.  For this reason, we could not conform to the abortion-pill mandate; many of its methods can cause the death of an embryo by hindering its implantation.  We did not want to be facilitating abortions at any stage, or the taking of life, which is in direct conflict with the holy Scriptures and our deeply held religious beliefs.

Q: How did your employees react to the Supreme Court’s decision?

A:  Our employees are fully aware that our company was founded on Christian values and that it will continue to be run in such a way.  These Christian values have always been very visible through the display of our mission statements and our commitment to follow our values in our business.

We treat everyone, including our employees, fairly and with the Christian values with which we want to be treated. And we provide a generous health insurance plan.   We only ask not to be required to cover early-abortion-causing items in that plan.

Q: As you probably know, liberals in Congress proposed to “override” the court’s decision.

A: It has been a bit surprising, the reaction from the liberal pundits and elected officials. The Supreme Court simply ruled in favor of protecting a religious freedom that always belonged to Americans, including in business, and shielding them from what Americans have always been protected from: a federal mandate that they buy abortion products for other people.

The early settlers of America were fleeing religious persecution and came to this land to get away from government coercion against their beliefs.  They found in the new world a place of rest where they could live out their religious beliefs without the fear of being punished by the government.

Q: Do you believe that any business owner with religious objections to certain medical treatments or health care procedures has the right not to provide coverage for such treatment or procedures?

A: Our government was established for the protection of its citizens, and not to force its citizens to violate their deeply held religious beliefs. The government cannot meet the compelling interest test for these kinds of mandates, and therefore religious freedom should succeed in these cases for all Americans.

The Religious Freedom Restoration Act controls and draws that line, as do decades of statutes telling Americans that they cannot be forced to participate in abortion, sterilization, assisted suicide, or similar procedures.

Q: What other parts of the HHS mandate – or Obamacare as a whole — would your family business consider challenging in court?

A:  I hope there would not be any other parts of the Affordable Care Act that we would need to challenge in court.

The Supreme Court pointed out that if the government and the politicians who oppose our case have their way, HHS could force family businesses to provide coverage for “third-trimester abortions or assisted suicide.”

We certainly hope no legal changes are made to allow that kind of coercion.