While Senate Democrats Attack Trump’s HHS Pick Over Health Care Stock, These Democrats Hold It Too 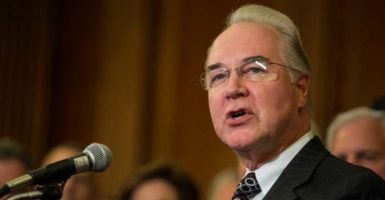 Rep. Tom Price, R-Ga., has been harshly criticized by Democrats for owning up to $300,000 worth of stocks in major health care companies. (Photo: Congressional Quarterly/CQ Roll Call/Newscom)

Price, a Georgia Republican, has been harshly criticized by Democrats for owning up to $300,000 worth of stocks in major health care companies like Aetna, Amgen, Athena Health, Eli Lilly and Co., and Pfizer. Price has been among the most vocal Obamacare critics in Congress.

Top Senate Democrats attempted Thursday to put additional pressure on the Price nomination by requesting an Office of Congressional Ethics inquiry to determine if Price broke any laws by owning the stock.

But the attack on Price could be blunted by the three Democratic senators also owning significant stock in health care firms. The Democrats’ ownership interests were listed in Senate financial disclosure forms reviewed by The Daily Caller News Foundation.

A Trump transition spokesman characterized the Democrats’ attack on Price as “hypocrisy.”

Congress passed the “Stock Act” in 2012 to discourage congressmen from buying and selling corporate stocks based on their insider knowledge of pending legislation.

Whitehouse’s estimated net worth is between $9 to 14 million. He was elected to the Senate in 2007

Sen. Tom Carper, a former governor of Delaware, has been in the Senate since 2000 and now sits on the Senate Finance Committee, which votes on legislation proposed by its subcommittee on health care. He also is a member of three health care-related caucuses in the Senate.

Virginia’s Sen. Mark Warner is the Senate’s wealthiest member and has extensive investments in the health care industry. He sits on the Senate Finance Committee’s health care subcommittee.

Warner also owns stock in Ziopharm, which saw its stock fall in June 2016 when it announced that a cancer patient died after being injected with a substance produced by the biotech company. The substance was not part of its main experimental program but the stock plummeted 18% in June and is still at historic lows.

Warner, whose fortune is estimated at nearly $91 million, holds his stock in a blind trust.

Senate Minority Leader Chuck Schumer of New York claimed during a Thursday news conference that “Congressman Price had the influence and was actively involved in pushing health care policies, while simultaneously making dozens of trades in companies that would be impacted by those policies.”

Schumer was joined by Democratic Sens. Patty Murray from Washington state and Ron Wyden from Oregon.

“We don’t know if he broke the law. But there is certainly enough serious questions to warrant a serious investigation,” Schumer conceded.

Phil Blando, a Trump transition spokesman, shot back at the Democrats, telling The Daily Caller News Foundation that “hypocrisy is apparently alive and well this morning in Washington. The same questions being raised today by Sen. Schumer about Dr. Price should be directed to Sens. Carper, Warner, and Whitehouse, who own and have traded hundreds of thousands of dollars in pharmaceutical and health insurance company stocks.”

Blando added that “Price’s 20-year career as an orthopedic surgeon and a fiscal conservative make him uniquely qualified to lead HHS. Today’s stunt is simply an effort to deflect attention away from Obamacare’s dismal record, including reduced choices and $700 billion in Medicare cuts.”

Price was a practicing orthopedic surgeon for 20 years before being elected to Congress. During the House Obamacare debate, Price led an informal caucus of physician lawmakers who opposed the program.